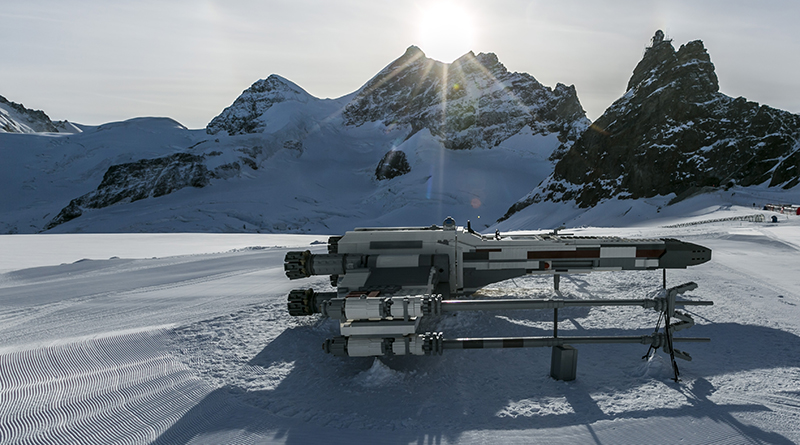 To celebrate 20 years of LEGO Star Wars, a full-sized LEGO X-wing has been taken to the Swiss Alps, with photos coming back that might as well be from the ice planet Hoth.

In preparation for the release of new LEGO Star Wars sets in this 20th anniversary year, LEGO Certified Professional Georg Schmitt and a 10-person team built a life-sized X-wing in 1,500 hours, using two and a half million LEGO elements. They then took this incredible creation to Europe’s highest point, Jungfraujoch in Switzerland.

The 10 by 10 metre model sat in the snow is reminiscent of when Luke Skywalker is alongside his X-wing on the ice planet Hoth in Star Wars: The Empire Strikes Back.

“LEGO Star Wars has inspired children and adults across the world for 20 years and stands for limitless building and play. Bringing a life-sized LEGO Star Wars X-Wing to the Jungfraujoch symbolises the power of creativity and shows that the new LEGO Star Wars sets allow us to play out the story after the latest episode,” says Florian Gmeiner, Senior Marketing Director for LEGO GmbH. “Playing with LEGO bricks lets the imagination soar and allows us to tell stories and sometimes even master challenges. With this event, we’d therefore like to invite everyone to believe in their dreams and their potential because the Force is in your hands.”

New sets based on The Rise of Skywalker and The Mandalorian launched today:

Triple Force Friday promotions give LEGO.com customers double VIP points on all LEGO Star Wars orders and a free exclusive 40362 Battle of Endor – 20th Anniversary Edition set with any orders on the theme totalling £75 or more.