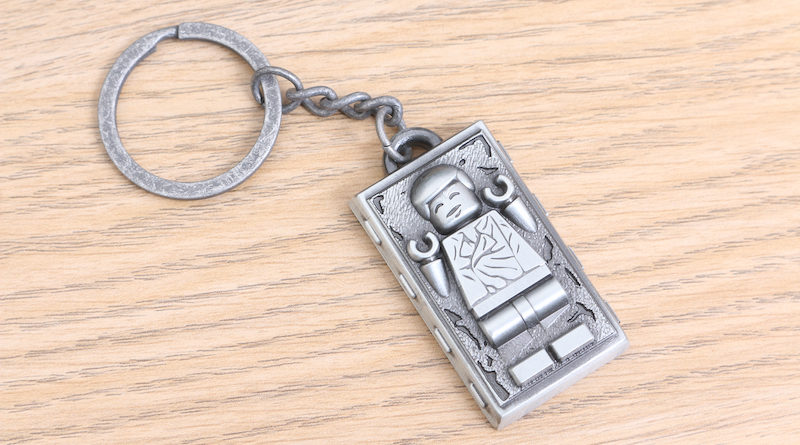 It may require a £100 spend to secure, but the LEGO Star Wars Han Solo in Carbonite metal keychain is pretty special all the same.

Gifts with purchase have been hit or miss in recent years, particularly those associated with LEGO Star Wars, where the balance between spend required and novelty of the gift hasn’t always felt correct. The recent Yoda’s Lightsaber build available for the first five or so people who bought 75290 Mos Eisley Cantina is one such example. Those able to pick it up more often than not just ended up complaining about its design.

Initial reactions to the Han Solo in Carbonite metal keychain suggested that it too would struggle to justify its worth, as the latest promotion at LEGO.com and in LEGO stores, running from October 30 through November 8 (or more accurately, while stocks last). Indeed, requiring a spend of £100 / $100 / €100 on LEGO Star Wars products is a steep ask to qualify for any incentive, let alone one, solitary keyring.

However, even if all it remains is a metal version of a familiar LEGO element attached to a keyring and presented in a neat box, there’s something special about the Han Solo in Carbonite metal keychain that really does make it worth your consideration.

It seems a while since the LEGO Group has produced a LEGO-adjacent product as a gift-with-purchase within the LEGO Star Wars line. The posters and art prints from a few years ago were a great extension into the theme, skilfully taking what was familiar and applying it to a new context and new medium.

Putting it into metal gives it a solid feel, a notable weightiness and a truly unique finish, that all together gives the keychain a real sense of quality. Putting it into LEGO also adds a further level of authenticity to the element that it recreates. It’s an incredibly simple idea but one that so effectively works, both for what it is trying to achieve creatively, and what it is trying to offer from a quality perspective.

It’s a LEGO version of Han Solo, in Carbonite, recreated in metal. The mould is incredibly detailed for the fact it is in metal, coming in at roughly two-thirds of the size of the original LEGO element and managing to capture much of what is seen in that plastic version.

When you know there’s a gift-with-purchase promotion coming at the LEGO store and at LEGO.com for LEGO Star Wars, there’s always a sense of anticipation for what it could be. This is in spite of how inconsistent and at times disappointing recent offerings have been, and is because of how when the LEGO Group gets it right, it can create something really special.

The gift-with-purchase promotions are an opportunity to try something new, to offer something different and to capture the essence of why we love LEGO and LEGO Star Wars in a smart, charming way. It’s the chance to put in front of consumers something they didn’t realise they wanted until it existed.

5006363 Han Solo in Carbonite Keyring is one such gift-with-purchase – it may require a hefty outlay of £100 / $100 / €100 – and that spend will be down to you and if you honestly and responsibly want to spend that much on LEGO Star Wars products. If you do have the money and the inclination to do so, finally again we can say that there’s a LEGO Star Wars gift-with-purchase worth its weight…

It’s a unique creation that packages the charm and familiarity of LEGO Star Wars in a new and interesting way. With a quality finish too, it ticks all the boxes that a LEGO Star Wars-themed gift-with-purchase should. If you see the qualifying spend as responsible and justifiable, then 5006363 Han Solo in Carbonite Keyring is a pretty special gift-with-purchase waiting to be picked up.

Support the work that Brick Fanatics does by purchasing your LEGO Star Wars through one of our affiliate links. It directly funds the work that we do.

As one half of Tiro Media Ltd, I mix a passion for print and digital media production with a deep love of LEGO and can often be found on these pages eulogising about LEGO Batman, digging deeper into the LEGO Group’s inner workings, or just complaining about the price of the latest LEGO Star Wars set. Make a great impression when you meet me in person by praising EXO-FORCE as the greatest LEGO theme of all time. Follow me on Twitter @RobPaton or drop me an email at [email protected]m.