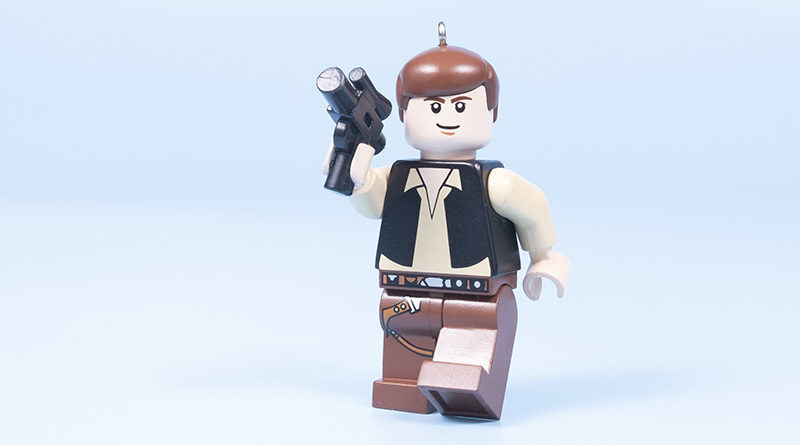 Hallmark Keepsake adds the self assured smuggler from LEGO Star Wars, Han Solo, to the collection as an upscaled Christmas ornament.

Each year, Hallmark releases a selection of new officially licensed LEGO Christmas decorations as part of the Keepsake collection. There are two Star Wars themed LEGO characters in this year’s line-up, with Han Solo and Chewbacca available to adorn the Christmas tree.

The decoration is not based on the latest version of this LEGO Star Wars minifigure, but is based on the body and legs from 2007, with the face based on the one introduced in 2010.

What a great decision it was to base this ornament on the 2010 edition of Han Solo. The original 1999 edition would have had the yellow face, which would be jarring next to other modern decorations, while the latest one is a bit too detailed for that classic LEGO feel. This version has the perfect balance between being modern enough, but having simple enough decoration to really feel like a LEGO minifigure.

This Christmas decoration is an upscaled version of the Han Solo minifigure that is included in many of the theme’s sets.

Like all of the LEGO ornaments from Hallmark, Han Solo is a single sculpted piece and features no articulation. Despite it being made of plastic, it feels like a proper Christmas decoration and looks a bit more crafted than some other upscaled minifigure products, such as the key lights.

LEGO Star Wars fans will enjoy this Han Solo ornament, which offers the perfect balance of capturing classic LEGO minifigure simplicity and modernity. It would be a crime to get just Solo though, so anyone ordering this decoration should order him alongside Chewbacca.