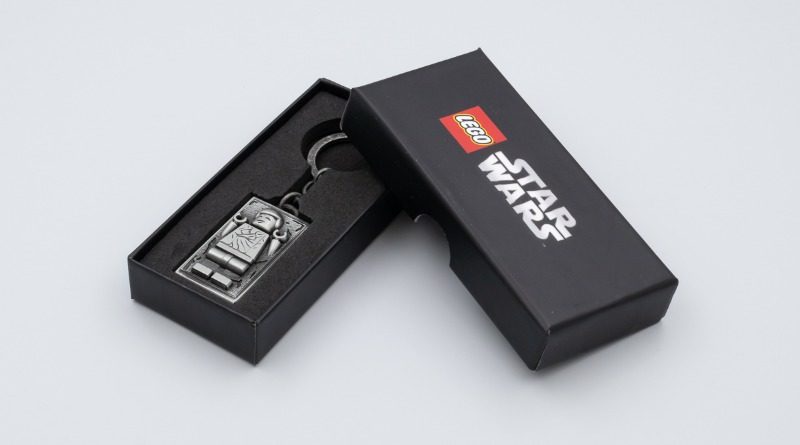 You’ll need to spend at least £100 / $100 on LEGO Star Wars products to bag the freebie. If you’re on the fence about whether to take the plunge, though, Hoth Bricks has provided our first look at this exclusive gift in the flesh.

The very unique collectible comes packaged in a sleek presentation box adorned with the LEGO and Star Wars logos. Lift away the lid, and you’ll reveal the hefty key chain nestled inside a foam insert.

According to Hoth Bricks, the metal accessory weighs around 60 grams. Unfortunately, there’s no indication as to its composition, or indeed any specifics behind the material used. But it seems to be a pretty solid and reasonably heavy gift given its size, so it’s perhaps not one you’ll actually want to pop on your keys.

That doesn’t make it any less desirable as a collector’s item, though. The design replicates the Han Solo in Carbonite piece that’s been in production since 2010, so LEGO Star Wars fans will find it comfortingly familiar. And it’s no less impressive on the back, featuring an engraving of the LEGO VIP logo.

If these pictures have sold you on the key chain, you may need to act quickly. Recent LEGO.com promotions like 6346098 Yoda’s Lightsaber have sold out almost instantly. At the moment, the Han Solo key chain is still adding to baskets on LEGO.com in the UK, but that could really change at any moment.

If you’re looking for something to buy, LEGO Star Wars 75318 The Child has launched today, priced at £69.99 in the UK, $79.99 in the USA and €77.97 in Germany. That will put you well on the way to qualifying for the deal. Alternatively, you can stay in the Mando mood with 75292 The Mandalorian Bounty Hunter Transport, which is enough to qualify all on its own.

Two other promotions are currently running at LEGO.com: a £35 purchase will net you LEGO Hidden Side 30464 El Fuego’s Stunt Cannon, while a £100 spend means you’ll also qualify for the returning LEGO MINDSTORMS 40413 Mini Robots. These offers stack, so a single £100 LEGO Star Wars purchase will see you bag all three.