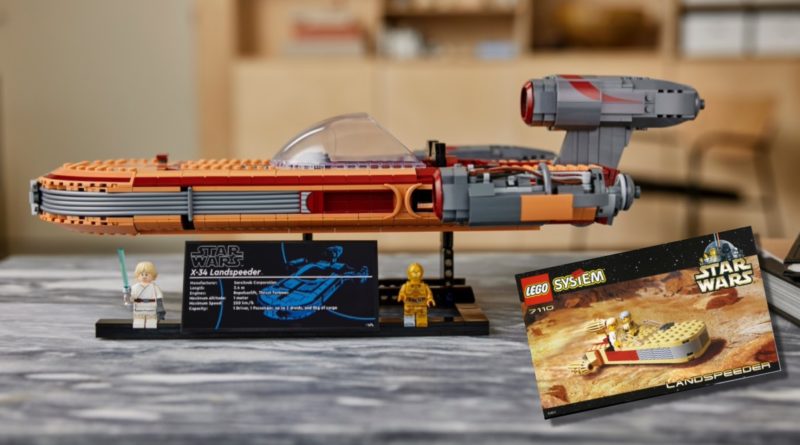 At one stage in its development cycle, LEGO Star Wars 75341 Luke Skywalker’s Landspeeder took one of its design cues from the original 1999 set.

While there’s a huge gulf in design between even just the first and latest minifigure-scale iterations of the X-34 Landspeeder – 7110 Landspeeder and 75271 Luke Skywalker’s Landspeeder – the latest (and biggest) version blows every previous attempt out of the desert sand. That’s no surprise given its inflated budget and part count, but it makes drawing lines between the various LEGO Landspeeders that bit trickier.

It turns out it was almost much easier, though, because 75341 Luke Skywalker’s Landspeeder nearly ended up taking inspiration from not just a minifigure-scale Landspeeder, but the very first. Among the rest of the original LEGO Star Wars sets, blocky as they were, the 7110 Landspeeder holds up surprisingly well: the engines and windshield are basic and of their time, but the general shape and size is spot on.

Of course, bumping up the part count to 1,890 allows for far more detail than you’d ever find in a 49-piece set, but it’s not in 75341 Luke Skywalker’s Landspeeder’s exposed engine wiring, dark red accents or unique windshield that the influence of the 1999 set was almost felt: instead, it was in the Ultimate Collector Series set’s colour scheme.

The designers of the original Landspeeder opted for tan as a base colour, but by 2004 the LEGO Star Wars team had already pivoted to sand red in 4501 Mos Eisley Cantina. The next iteration saw a brief switch back to tan, before the current nougat base colour was locked in with 75052 Mos Eisley Cantina’s X-34 Landspeeder. It’s the colour designer César Soares ultimately chose for 75341 Luke Skywalker’s Landspeeder, but it wasn’t always on the table.

“I briefly experimented with sand colours, and one of the main reasons is that [nougat] is a very rare colour, so it would mean a lot of colour changes,” César explains. “So I did experiment a little bit with tan, but we realised very, very early that [nougat] was the colour scheme to go [with]. We discussed that if we’re going to do it, we’re going to do it right. And in the palette of colours we have, this is the best we can do.”

That’s not to say that either the tan or sand red versions of the Landspeeder were inaccurate, however – at least from a certain point of view.

“Different lighting can define how a colour actually appears,” adds LEGO Star Wars Creative Lead Jens Kronvold Frederiksen. “Usually we will always look at movies, because that would be people’s reference. So if you have, let’s say, a photo of a prop that’s taken in the studio, well, it doesn’t look like that. And then we’ll follow how it looks in the movie.”

It’s a similar story to Han Solo’s jacket in the beginning of The Empire Strikes Back, only the LEGO Group curiously went the other way there: the original prop is brown, but the lighting on Echo Base gives it a blue hue. The minifigure has appeared in sets with both colours, but most prominently as a May the 4th polybag, where he was sporting the brown jacket.

You can take a closer look at 75341 Luke Skywalker’s Landspeeder – including its final colour scheme – in our early review. You’ll be able to pick it up for yourself from May 1 if you’re a VIP member. Check out our dedicated May the 4th page for more info.