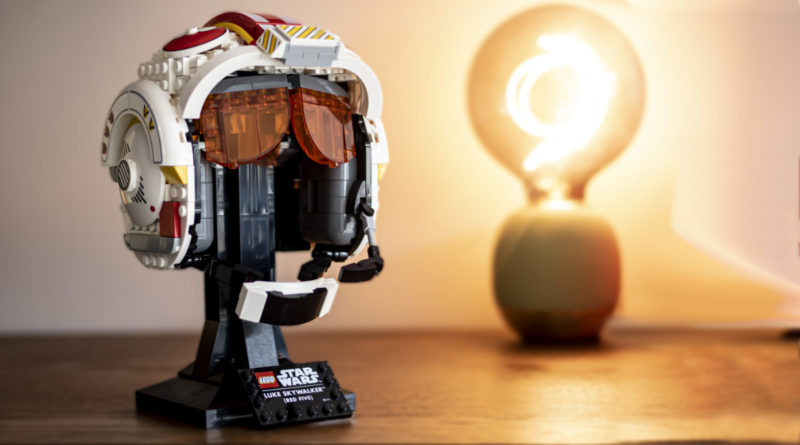 75327 Luke Skywalker (Red Five) Helmet is a unique entry in the LEGO Star Wars Helmet Collection, but will the open-faced design hit the target?

LEGO for Adults has enjoyed immense success since it launched back in early 2020. The first sets to feature the 18+ branding and black box artwork were the LEGO Star Wars helmets. Although we’ve seen a number of iconic characters such as Darth Vader, Boba Fett and several Imperial troopers, there’s yet to be any representation for the Rebellion.

The balance in the Force has been somewhat readdressed in this latest wave with both 75328 The Mandalorian Helmet and 75327 Luke Skywalker (Red Five) Helmet. The style of the Mandalorian’s bust is in keeping with the rest of the sets in the subtheme, but Luke’s iconic helmet stands out as being wholly unique next to its counterparts.

The LEGO Group has attempted open-faced busts before in the guise of 76182 Batman Cowl and 76238 Classic TV Series Batman Cowl, which both received fairly mixed reviews. Will 75327 Luke Skywalker (Red Five) Helmet fall foul of the same issues that plagued the Dark Knight’s models, or will we discover the Force is strong with this one?

First donned by Luke Skywalker as he climbed aboard his T-65B X-wing Starfighter during the climatic trench run in A New Hope, the X-wing fighter pilot helmet is as much an icon of the original Star Wars trilogy as Darth Vader’s mask and Stormtrooper helmets. Unlike those characters, Luke’s headgear is open-faced, and as such a different approach to the build and overall design is required in order to capture the famous shape and style.

For those with experience building previous Star Wars helmets, this build begins in familiar fashion with the construction of the stylish black plinth (upon which the helmet is placed), the inner core to which the helmet’s detail is eventually added, and the stacked plate techniques that create the curved shaping across the top and back.

The build begins to feel more unique with the additions of the front visor and the helmet’s top ridge, connected from the front to the back using yellow hose pipes. This not only helps to anchor the front of the helmet to the rest of the build, but also achieves an excellent piece of detailing, recreating the yellow stripes that run down either side. The visor is built using two 4x1x2 trans-orange curved slopes. It’s an interesting technique that does the job, but a single shape, rather than two separate pieces, may have looked more authentic.

The sides are two separate sub-assemblies that use a mix of curves, dishes and tiles to create the shaping, with both printed parts and stickers used for the detailing. Once connected they add a decent level of authenticity. To finish, two 4×4 printed dishes with the Rebel Alliance insignia (similar to the Imperial logo found on 75274 Tie Fighter Pilot Helmet) are attached to the top, and finally a chin strap and headset complete the model.

Unlike the Batman cowls, Luke’s helmet looks very smart, capturing the iconic details incredibly well. It’s not without its faults, though: the ridge at the top is perhaps a little small compared to its on-screen counterpart and, while a very valiant attempt, the trans-orange goggles don’t quite work.

Overall, it’s an enjoyable build but one that feels incredibly short, with the whole thing coming together with relative ease and in a relatively short amount of time. It doesn’t feel quite as involved as those that have come before and despite the decent final model, unlike Luke, this set’s build narrowly misses the target.

As with all of the LEGO Star Wars Helmets, no minifigures are included with the set. This is not the section you are looking for. Move along, move along.

When looking at the piece count, 75327 Luke Skywalker (Red Five) Helmet is in-keeping with previous models and feels fairly priced. However, the build feels more comparable with the considerably cheaper 75305 Scout Trooper Helmet, which offered an equally short construction experience.

If this set was priced slightly cheaper, it would feel like better value for money. Whether that will be an issue comes down to what you place more importance on when purchasing a set: if it’s the final model then this will prove to be a decent buy. If it’s the build, you might want to look at other, more involved helmets before this one.

As the first attempt at an open-faced helmet within the Star Wars universe, 75327 Luke Skywalker (Red Five) Helmet is a success. It looks pretty accurate, is full of authentic detailing and captures the unmistakable look of the X-wing pilot’s headgear very well. Designing it to resemble a helmet on a plinth rather than a hybrid between a full head and helmet like the Batman cowls was a smart move that’s paid off.

However, it’s not all positive, as the build is somewhat lacking and is over fairly quickly. Despite its unique appearance within the subtheme, it doesn’t feel as inventive or involved as what has come before, leaving you with a build experience that is fun while it lasts, but quite forgettable once it’s finished.

That said, it looks excellent displayed on its own, and even better next to the other helmets in the collection, adding interest, a splash of colour and – at last – giving the Rebellion a fair representation.

Only four bags are needed to complete 75327 Luke Skywalker (Red Five) Helmet, and due to the open-faced design, the build feels like it’s over much quicker than what’s come before. Set aside just over an hour to complete this model.

How many pieces are in LEGO Star Wars 75327 Luke Skywalker (Red Five) Helmet?

75327 Luke Skywalker (Red Five) Helmet includes 675 pieces, but does contain some exclusive printed parts such as the 3×3 dishes with Rebel insignia, giving the set a much more authentic look.

75327 Luke Skywalker (Red Five) Helmet is a comparable size with the rest of the helmets in the collection, measuring 19cm high, 12cm wide and 13cm deep,