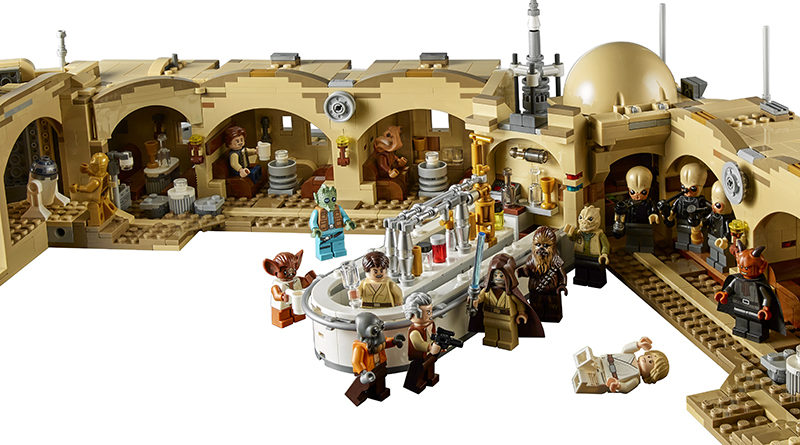 While Ultimate Collector Series sets offer the ultimate display models, intended to sit on a shelf and be admired (perhaps with the occassional swoosh around the room), Master Builder Series sets offer something different. These are basically typical LEGO Star Wars sets with minifigures, but upscaled to make them appeal to the overgrown child inside every AFOL.

With 75290 Mos Eisley Cantina due to launch on September 16, Brick Fanatics takes a look at the five largest LEGO playsets so far.

Taking the location from the culmination of Star Wars: The Empire Strikes Back, which had been released as 10123 Cloud City back in 2003, 75222 increases the detail and accuracy, offering every recognisable room from Lando Calrissian’s city in the clouds.

It’s not just the dramatic location where Vader reveals Luke’s parentage, the Carbon Freezing Chamber and the landing platform that are incorporated into the model – even the dining room and hallway make into this very complete playset.

Just slightly smaller than 75059 Sandcrawler, this new Tatooine based set is the perfect companion piece to the moving Jawa home. The iconic location looks great from the exterior, but also unfolds to have a fully accessible interior – giving fans the best of both worlds.

A line-up of 21 characters means that key cantina scenes can be recreated, including Han Solo shooting Greedo, Luke getting into trouble with Ponda Baba and Wuher refusing to serve droids.

Offering something that lived up to the on-screen treaded vehicle in a way that its predecessor didn’t, 75059 Sandcrawler featured interior sections as well as being a huge, imposing vehicle. A neat steering function allows the big, brown moving fortress to be directed.

Including multiple droids, the set allows fans to recreate the scene in which C-3PO and R2-D2 are sold to Uncle Owen by the Jawas.

While 10143 Death Star II offers the ultimate display model Death Star, 10188 offers the ultimate playset edition. All of the key locations from the space stations in A New Hope and Return of the Jedi are there – the trash compactor, the throne room, the chasm and the conference room are all present.

This is what adult fans dreamt of as children, with the model capturing the shape of the space station but also including key rooms and locations, while including enough minifigures to re-enact memorable scenes in them. It might be the finest LEGO minifigure scale playset ever released.

‘When will 10188 Death Star be retired?’, fans wondered for years. This incredible set was so appealing to so many people that the LEGO Group left it in production for much longer than a standard set, then when it retired released this updated version that is broadly the same, aside from a few tweaks.

Those tweaks were broadly to ensure that the set uses parts that are currently in production, but also refined the design in certain areas so that it fits in with other, modern LEGO Star Wars sets. Completists will need 10188 and this version, but everyone else will be best served by this newer edition.

Get in touch with Brick Fanatics at [email protected]o.uk