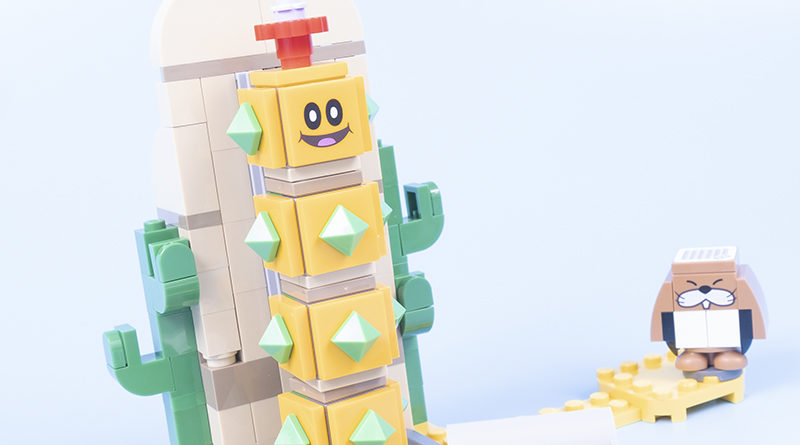 Defeating a Pokey is a satisfying moment that is reached after some clever building in LEGO Super Mario 71363 Desert Pokey Expansion Set.

As one of the smaller sets in the LEGO Super Mario theme, 71363 Desert Pokey Expansion Set is not going to significantly increase the footprint of a LEGO level. What is immediately apparent though is that the striking colour scheme and desert locale will add a distinct visual flair. Is this just a pretty set or does it offer decent gameplay too?

Every LEGO Super Mario Expansion Set requires 71360 Adventures with Mario Starter Course to build and play, including this one.

Like most of the LEGO Super Mario sets, this is a quick build made up of small components, which are then connected using the two wide plates and platform pieces.

At the centre of the set though is the Pokey and structure it attaches to. The way this is built is really simple, but so clever at the same time. A runner goes down from top to bottom, with a conical LEGO brick attached to each section of the Pokey slotting into it. There’s a gap at the bottom, so as the swinging hammer bashes out the bottom section, the Pokey drops.

In terms of gameplay, that means that Mario hops into the swinging device and spins, whacking sections out of the Pokey until the defeat-able, scannable section is revealed. He can then jump on it and defeat the enemy as usual.

As well as being a clever build, the Pokey section is visually striking, clearly evoking the desert setting beyond the yellow bricks that the model is built on. This has been a weakness of other sets in the theme – sometimes, the yellow, green or red pieces are used in place of genuine scene-setting.

The Pokey is visually excellent, capturing the right vibe – like Mario and every other character in the theme, it has been adapted to the square LEGO style rather than attempting to follow the spheres of the video games. The character also cleverly takes advantage of the way the villains are sectioned in appearance to allow it to be defeated by bashing sections away.

Monty Mole also appears here, which is great news for fans who missed out on 40414 Monty Mole & Super Mushroom Expansion Set. That was only available as gift with purchase for a limited time, so it’s good that the character has been included in a regular set.

Sets in this price bracket are much more acceptable than the more expensive sets in the theme. Sure, there’s only one bit of gameplay to be found here, but that’s also the case in some of the pricier sets. It still feels 25% too expensive, but in an expensive theme, it’s better value than most sets.

71363 Desert Pokey Expansion Set is one of the better LEGO Super Mario sets in the theme, offering an engaging and clever build that results in a fun, and unique, gameplay function that works well. Thanks to the lower price point, it is better value than most Mario sets, and is worth adding to a LEGO level.

71363 Desert Pokey Expansion Set is available now at at LEGO.com. You can help support Brick Fanatics’ work by using our affiliate links. 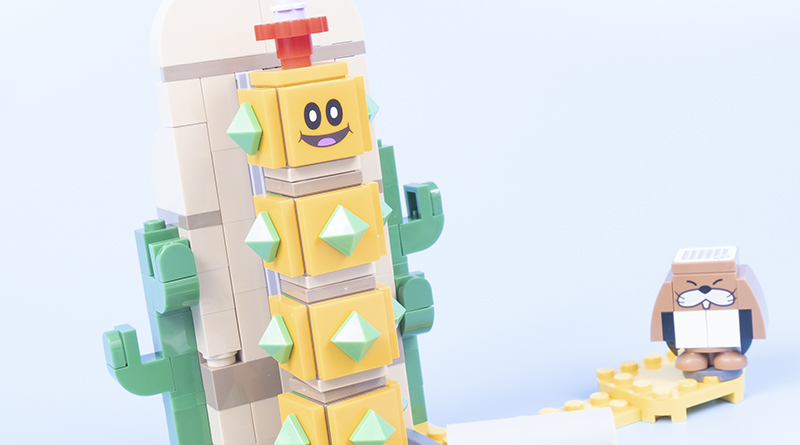