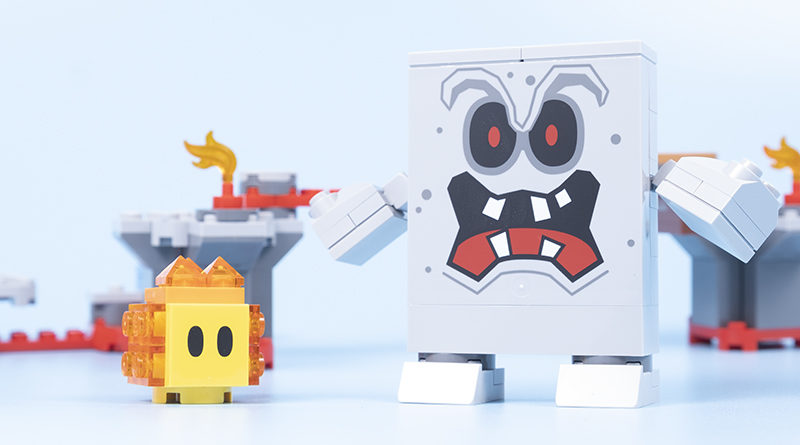 Each LEGO Super Mario set offers an appealing villain as the centrepiece. 71364 Whomp’s Lava Trouble Expansion Set is a set that doesn’t offer anything overly innovative in terms of challenges to add to a level, but it is anchored around a Whomp – a regular bad guy who dates back to Super Mario 64.

Every LEGO Super Mario Expansion Set requires 71360 Adventures with Mario Starter Course (review) to build and play, including this one.

Unlike the other set at this price point, 71363 Desert Pokey Expansion Set, the environment is built as it is for most sets in this theme. The red platform pieces have easy-to-build stone sections constructed on them, which are for Mario to jump to, so he can avoid the lava.

Two platforms are connected by a lava stream – a 2×14 red plate – with a space that slides across it. It’s a simple build and similar to what is found within other sets in the theme. While the balancing tasks may be common in the theme, they are some of the most fun, as they provide a genuine challenge when guiding Mario around a level.

Another section involves building a grey stone platform onto a turn style, which will offer the opportunity to knock an enemy off the platform.

Once Thwomp is defeated, a P block is revealed. Mario can hop onto it to gather extra coins while walking for a few seconds.

The most satisfying part of the build is the Whomp. While the character has a simple construction, the big printed face piece is excellent and a great match for the games. It also helps that the character is square, so it translates better than some of the rounded characters that end up looking boxy.

A Lave Bubble is included too. By turning one of the grey stones, it will fall off so that Mario can jump on its back to defeat it. The function’s simple, but offers a neat little way to defeat the villain.

Given that the main mechanism in this set can be found elsewhere in the theme, it does not feel like good value for money. The draw here is the Thwomp, so those collecting all of the characters will feel compelled to get this set, but everyone else will prefer to pick up the more unique Mario sets.

71364 Whomp’s Lava Trouble Expansion Set is one of the lower priced sets in the LEGO Super Mario theme, yet it fails to offer value for money. A simple mechanism that is included in other sets makes up the majority of this one, with little else of note other than the Thwomp – but for many collectors, that will be just enough to put this set on the wish list.

71364 Whomp’s Lava Trouble Expansion Set is available now at at LEGO.com. You can help support Brick Fanatics’ work by using our affiliate links.