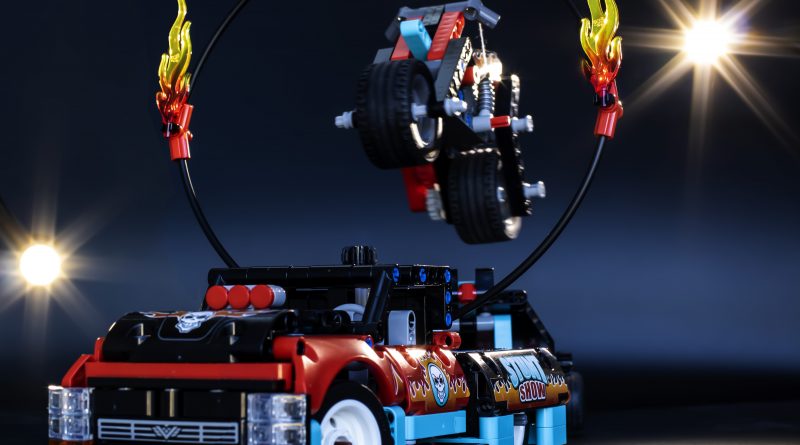 Is LEGO Technic 42106 Stunt Show Truck And Bike a thrilling show-stopper or a lacklustre effort?

42106 Stunt Show Truck and Bike contains 610 pieces, which builda pull back stunt bike, a ramp (that doubles as a trailer) and the stunt show truck. There is also that buildable ring of fire that the stunt bike bravely jumps through.

The box art depicts something action packed, fun and exciting – but is it right to judge a LEGO set by its box?

The build begins by constructing the pull back stunt bike. It’s a straightforward build relying on angled beams to form the necessary shaping for the chassis. Despite the simplicity of the build, it’s a great example of what can be achieved through a small collection of Technic parts. The handle bars in particular are built using just two light grey angled pin and axle connectors – it is simple yet incredibly effective.

The stunt bike is powered by a large 6x5x3 pull back motor that has been used in a number of LEGO Technic sets since it was introduced in 2013. They provide a lot of power to Technic vehicles, propelling them forward with quick acceleration and great top speed. The problem is that they are quite big and often hard to hide within a model.

The designers of 42106 Stunt Show Truck and Bike have managed to not only build the framework around the motor, cleverly integrating it into the build, but have gone one step further by adding two skull stickers to each side, tying the motor into the whole set. It is a very clever design choice. To add even more power to the motor, a basic gear system is used on one side of the bike. The bike is then finished with two small panels on the side, finished with flame decal stickers tying the colour scheme together.

With the bike complete, the set then turns its attention to the trailer that connects to the back of the truck. This also doubles up as the ramp that will be used for the death defying stunt.

The trailer’s body is made up of four large panels and takes shape very quickly. Underneath is a neat little lever mechanism that allows for the trailer to be lifted up into the ramp. Two flaps at the back can be lowered, providing the stunt bike with a smooth surface both off and onto the ramp.

The stunt bike attaches safely and snugly to the trailer with the use of an extended axle that connects to the underside of the bike when placed onto the trailer, which needs to be removed before launching the bike off the ramp.

The remaining parts of the set are split over two bags and go together to form the stunt show truck. The first stage concentrates on the framework. The truck isn’t that big and so fits into the hand quite well, making the build process very tactile. The colour scheme of medium azure, red and black is also very pleasing on the eye – who would have thought this would be a LEGO set that stimulates both the mind and the senses?

The build becomes more interesting with the addition of the gears and axles that go together to form the moving parts of the truck. A rudimentary gear system controls the steering of the truck, consisting of a gear connected to a pin and axle, which connects to another gear and towards the front of the truck.

Twisting the axle in the middle of the truck controls the steering left and right. It may be simple, but for younger fans it serves as a great introduction into the world of engineering and it is pretty satisfying to watch the mechanics come to life and work in just a few steps.

As the build progresses, the truck’s framework begins to take shape through more great use of angled beams cleverly hinged in places to create the shaping of both the bonnet and the roof. Once the frame work is complete, the final bag concentrates on the body work for the truck and finally the ring of fire that forms the daring stunt for the bike to jump through.

The final stages begin by assembling the front bumper. Fans familiar with the LEGO City and Speed Champions will recognise the techniques employed. The bumper is brick built using trans-orange and trans-clear tiles and 1×1 slopes to make up the lights, which are then attached to both sides of the front of the truck. The front grille returns to a more conventional Technic technique using axles, pins and Technic bricks.

A sticker is applied at the front to complete the grille detail. Stickers are a very divisive topic among LEGO fans with some loving them, some hating them. For Technic sets, stickers are almost a necessity to add all of the detail required. Here they most certainly add a lot to the final design covering the truck in skull and flames decals. The only sticker that might be overkill is the tiny 1×1 speed dial sticker designed to be placed on a round 1×1 tile. There are countless printed round 1×1 tiles with almost this exact design so it really does beg the question of why this sticker was made.

Sub assemblies for the bonnet and rear of the truck, coupled with the large side panels, allow the final look of the truck to quickly take shape, and it looks really good. The front has an almost muscle car feel to it – big, bulky and powerful. The sides and rear feel quite sporty being sleek and low down to the ground. The final element of the set to construct is the ring of fire, which attaches to the back of the truck via a Technic pin.

When all three models are placed together they look really excellent. The colour scheme is not that common in LEGO and looks very stylish and cool.

As for the big question is, does it actually work as intended? The short answer is, yes and no. Provided there is a perfectly aligned run up, with enough power and speed stored in the pull back motor, then the bike does indeed launch through the air, up the ramp and through the ring of fire. It can be fairly tricky to get it to work, with a fair amount of trial and error – but even taht is good fun, making hitting the stunt even more satisfying.

42106 Stunt Show Truck and Bike has a lot of positive points going for it. The build is fun and varied, while the finished models all look excellent. It has been a strong start to this year’s Technic offerings, let’s hope that continues right through 2020.

42106 Stunt Show Truck and Bike is available now at LEGO.com. You can help support Brick Fanatics’ work by using our affiliate links.