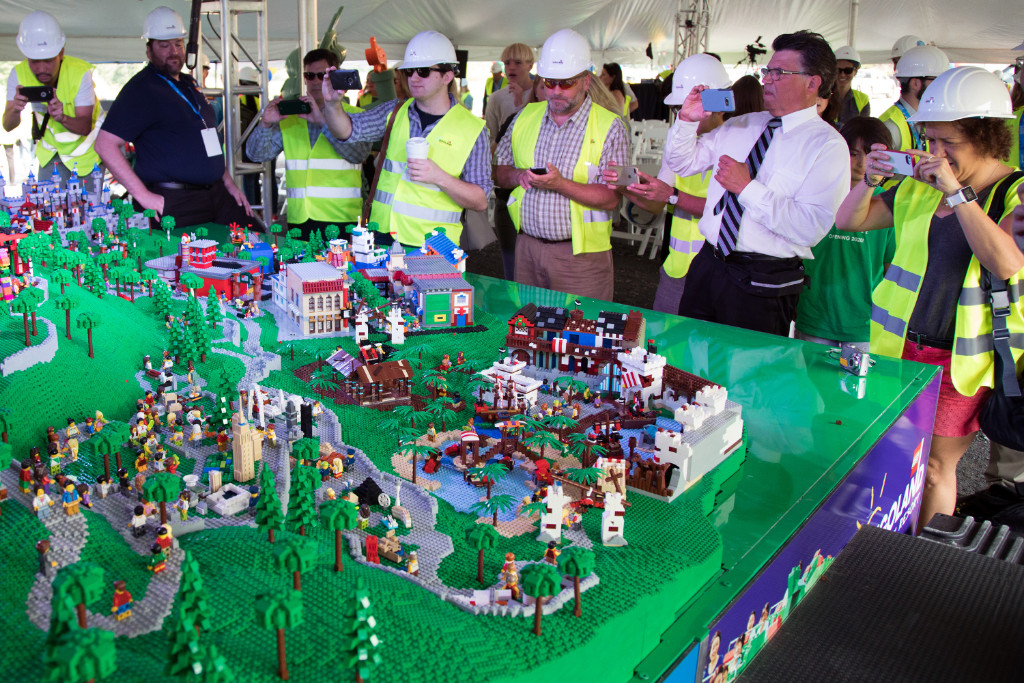 At a press conference, Merlin Entertainments dropped thousands of LEGO bricks to celebrate the unveiling of the company’s plans for the LEGOLAND New York Resort. A 10 foot model mapped out how the new theme park will look, which has been constructed by 20 Master Model Builder using 135,000 pieces.

The Great LEGO Adventure! will be a new ride, exclusive to the new LEGOLAND location, that will see guests seeing the LEGO manufacturing process through the eyes of a minifigure.

“LEGOLAND New York has been in the works for years and we’re excited to bring this unique family theme park to Goshen,” said Julie Estrada, Head of Public Relations North America for Merlin Entertainments. “Built on a 500-acre site just 60 miles northwest of New York City, LEGOLAND New York Resort is the first major theme park in decades to be built in the northeast.” 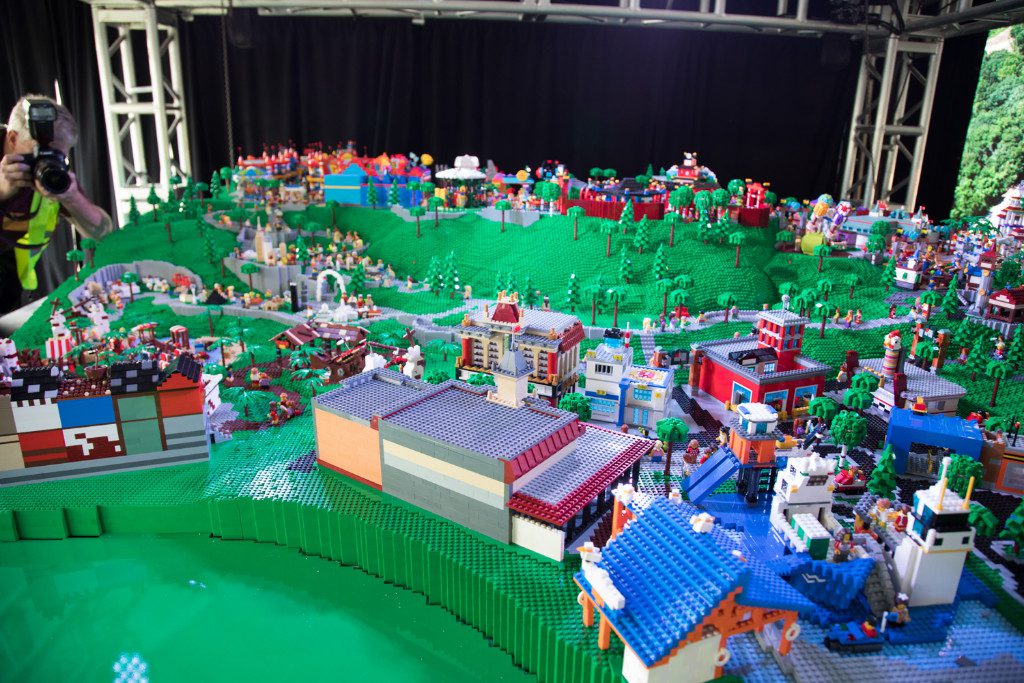 Eight themed lands will be part of LEGOLAND New York when it opens, with the following list provided by the attraction’s press team:

The Factory is the beginning of the LEGOLAND New York experience. Once you pass under the iconic arch, you’re in a world that appears to be built of LEGO bricks – and your first stop is the Great LEGO® Adventure! This ride, which is exclusive to LEGOLAND New York, will let you feel what it’s like to be a LEGO Minifigure, as you travel through the manufacturing process, into a box, and into the hands of a child just waiting to build!

Bricktopia is the land with no rules, where all those bricks are put to work to build anything you can imagine! Here you’ll work with Master Model Builders to build and test your LEGO creations – whether they’re designed to ride, float or fly – and see if your tallest tower can stand up against the Earthquake Table. You can also take a spin on the Imagination Celebration ride, or jump on the Stepping Tones to trigger crazy LEGO instruments!

LEGO NINJAGO World is where aspiring ninjas can master the ancient art of Spinjitzu. You’ll start in Training Camp, where you’ll learn to spin, climb, and become a master of the elements. Then put your training to the test on NINJAGO: The Ride, where you’ll help defeat the Great Devourer using just your hands as weapons.

Heartlake City is the home of the LEGO Friends: Emma, Olivia, Stephanie, Andrea and Mia. You’ll get to meet them all at the outdoor stage, then take a balloon ride over Pinefall Woods! While you’re there, you’ll want to sample some delicious Granny’s Apple Fries. This tasty treat is legendary among LEGOLAND visitors!

Knights’ Kingdom, home of the LEGO Castle, is a land where you’ll receive a royal welcome! In this land of knights, princesses, wizards and dragons, you’ll find the Dragon Coaster – not too big or scary, but perfectly sized to give kids their first roller coaster experience. Younger knights can help a new flock of baby dragons learn to fly at Dragon Rider School.

LEGO City is home of the Minifigures – and it needs heroes! Learn to be a LEGO City firefighter and help save the day at Rescue Academy, or, attend LEGO Driving School and get your official LEGOLAND driver’s license. Restaurants, shops and a theatre – there’s always something to do in this bustling metropolis!

Pirate Shores is the place for young buccaneers to find adventure! Climb aboard a galleon and say “Anchors Aweigh” as storms pick you up, toss you from side to side and spin you around! Or take a trip on the Rogue Wave Riders and do battle with water spouts and hungry beasts!

Miniland is the heart of every LEGOLAND Park, a massive panorama of LEGO built cities from across the country, with interactive features around every corner. Go from the Statue of Liberty to Times Square in just a few steps, and see bustling streets full of busy, animated pedestrians – even a moving subway!

The LEGOLAND New York Resort is due to open in Spring 2020.