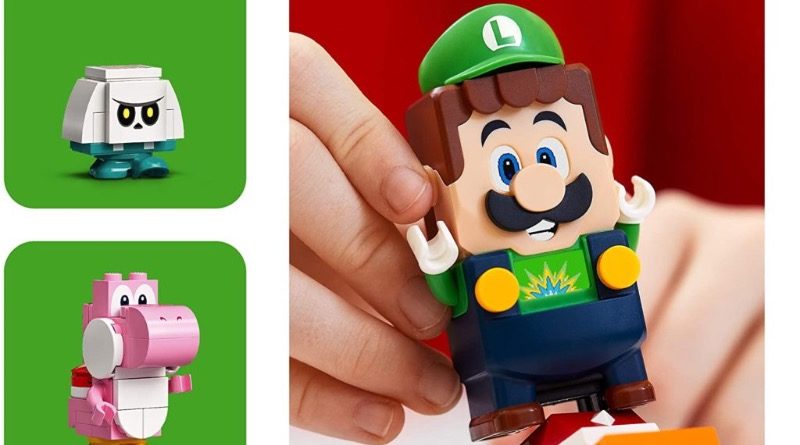 Just as we all expected, a second starter course will introduce Luigi to the LEGO Super Mario theme this summer – but what does it mean for the future of the video game theme?

Amazon China landed the scoop on 71387 Adventures with Luigi Starter Course yesterday, revealing the first images through a product page that may or may not have gone live slightly ahead of schedule. Either way, we now know that Nintendo’s green-suited plumber will join the LEGO Super Mario theme in July.

The question that now needs answering is: what exactly will Luigi bring to the table? Are we looking at just a simple colour-swapped character with slightly different audio, or has the LEGO Group cooked up something more for the most seismic addition to its Super Mario theme since last year’s enormous launch wave?

We probably won’t find out for sure until the company comes through with an official announcement for 71387 Adventures with Luigi Starter Course, but that won’t stop us wildly speculating about the possibilities Luigi has to offer.

For instance – and this is the most obvious potential benefit – multiplayer. LEGO Super Mario’s premise of building courses and scoring big points is just okay in isolation, but gets better when you introduce it into a competitive setting, challenging your friends to beat your score.

Now just imagine if you could run those courses simultaneously with Mario and Luigi, using expansion packs to set up alternate paths, hazards and enemies for each of the digital figures to traverse in tandem, racking up coins along the way. As well as the ability to better compete for the highest score, the LEGO Group could even add a co-operative option, with both characters sharing power-ups and time limits to achieve a collective coin total.

It looks likely that Mario will at least be able to recognise and interact with Luigi, so some form of multiplayer could well be on the cards. But even if it isn’t, that’s not all we could have to look forward to with Luigi joining the ranks.

We’d also love to see brand new Luigi-specific Power-Up Packs, complete with the plumber’s ‘L’ insignia on his cap, based on outfits he’s worn across various Nintendo titles. Some of those would likely just be straight recolours of existing Power-Up Packs, such as Cat Luigi or Propellor Luigi, but we’d still appreciate the chance to give the lesser-appreciated brother his own wardrobe.

Finally, Luigi also presents a golden opportunity to go beyond the basics of the LEGO Super Mario theme and introduce a brand new ghostbusting gameplay mechanic, with a potential expansion pack focused on Luigi’s Mansion.

Such a set could combine spooky enemies with a purpose-built Poltergust 3000 Power-Up Pack, making for a natural extension to the theme’s gameplay in a way that feels character-driven – and would instantly justify picking up 71387 Adventures with Luigi Starter Course.

For now, we’ll just have to wait and see what the LEGO Group has in store for its second digital figure. And if Luigi truly is just a recoloured Mario, well, at least two players will be able to better differentiate between their figures while taking it in turns to run courses.

But here’s hoping the LEGO Group and Nintendo have aimed for more than the bare minimum, because Luigi shows huge promise for the Super Mario theme. And they’ve already gone to the trouble of giving him slightly longer legs…