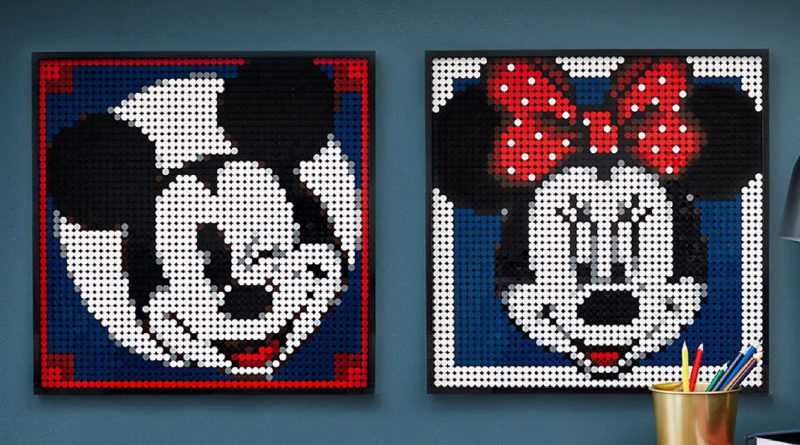 The LEGO Group have released a set of alternate instructions for LEGO Art 31202 Disney’s Mickey Mouse, providing another option for recreating the animated couple.

Following on from the alternate builds for LEGO Art 31201 Harry Potter Hogwarts Crests, more have been found on the VIP rewards centre for the other mosaic set released earlier this year, offering a way to display Mickey and Minnie’s modern looks in LEGO form.

If you already own the model, you’ll know that some guides are available to build the two Disney mice, both separate and as a couple, but only in their classic versions. However, these alternate instructions offer an updated example of what can be done with the provided bricks, you can find them on the VIP rewards centre for free now.

The new Mickey mosaic features a red border with the iconic mouse winking at you, spread across nine of the LEGO frame pieces. It’s a cheekier version of the character and will pair well alongside the other alternate build.

Minnie is the subject of the second set of instructions, because who else could it have been? While this could have been a chance to cover some other Disney characters such as Goofy, Donald or Daisy in LEGO Art, it seems the designers just couldn’t break the couple apart. This new version of Minnie is of the updated design and features a simple smile and bow on her head.

We’ll have to see if the LEGO Group releases any more alternate builds for the other LEGO Art sets, but it could be that with the other four being released last year, attention is being turned towards future projects. Either way, we won’t say no to more options for our LEGO sets and we’ll keep you updated if any more appear.

Both alternate builds are available now to redeem as rewards on the VIP rewards centre for free. Once you redeem them, they will be downloaded to your device as a PDF file.