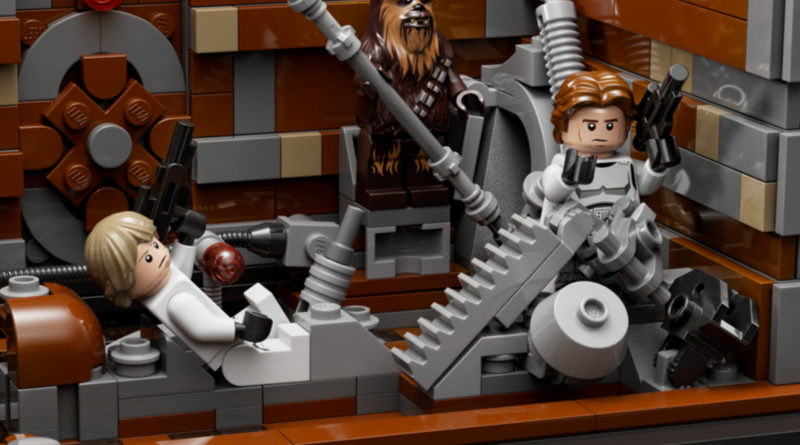 Only two of the upcoming trio of LEGO Star Wars Diorama Collection models include minifigures, with 75329 Death Star Trench Run Diorama focusing instead on a microscale recreation of one of the final scenes of A New Hope.

In 75339 Death Star Trash Compactor Diorama, not only are we getting a brand new C-3PO minifigure with arm printing but it also appears to include a new design for Stormtrooper armour, unless this change is limited to just Luke Skywalker’s disguise.

The most notable difference between the most recently released Stormtrooper minifigure in 75300 Imperial TIE Fighter and this potential redesign is the replacement of the white hip element with a black one, making the armour seem more uniform with the predominantly white colour scheme.

A blurry look at the printing from official images of 75339 Death Star Trash Compactor Diorama indicates that Luke Skywalker is printing a new look for the Imperial soldiers, with the chest area scaled up and proportions amended throughout the armour.

Whether or not this change is limited to 75339 Death Star Trash Compactor Diorama or will be reflected in a proper Stormtrooper minifigure later this year has yet to be seen, including whether or not it could sport a new helmet.

Support the work that Brick Fanatics does by purchasing or pre-ordering your LEGO Star Wars sets using our affiliate links. Thanks!