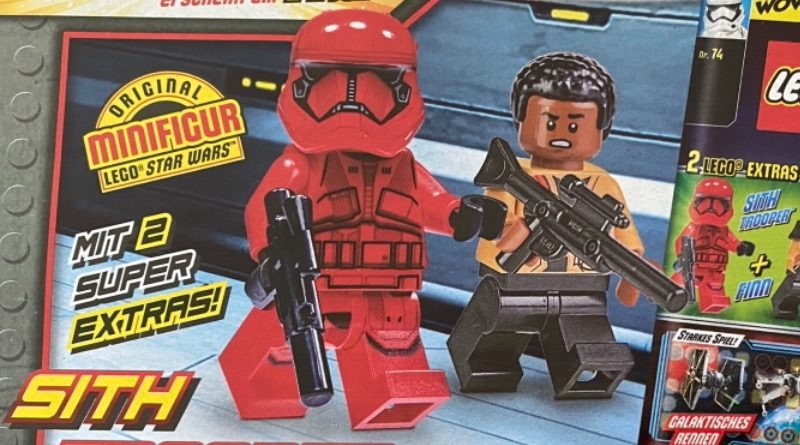 The next issue of the official LEGO Star Wars magazine includes not one, but two free minifigures from The Force Awakens and The Rise of Skywalker.

Immediate Media’s monthly mag lands on shelves a little earlier in Germany, so Promobricks has already been able to give us a glimpse into what’s coming in Issue 74 – and it should make minifigure collectors very happy.

That’s because Issue 73’s double-character count (with both Rey and BB-8 on the cover) is set to continue with Finn and a Sith Trooper. While the Resistance hero did fight against Palpatine’s red-armoured soldiers in The Rise of Skywalker, though, this particular minifigure design is based on Finn’s appearance in The Force Awakens.

The character’s Episode IX variant is a little rarer – coming in just two sets, compared to the Episode VII version’s five – but there’s actually not much between them on the aftermarket, with prices for both hovering around £5-6 on BrickLink. Plus, the one included in Issue 74 is otherwise only currently-available in 75192 Millennium Falcon, which is a pretty expensive way to add it to your collection.

By contrast, expect Issue 74 of the LEGO Star Wars magazine to retail for just £3.99 when it lands on shelves, which will likely be in early August. You won’t find a much cheaper pair of Star Wars minifigures than that.