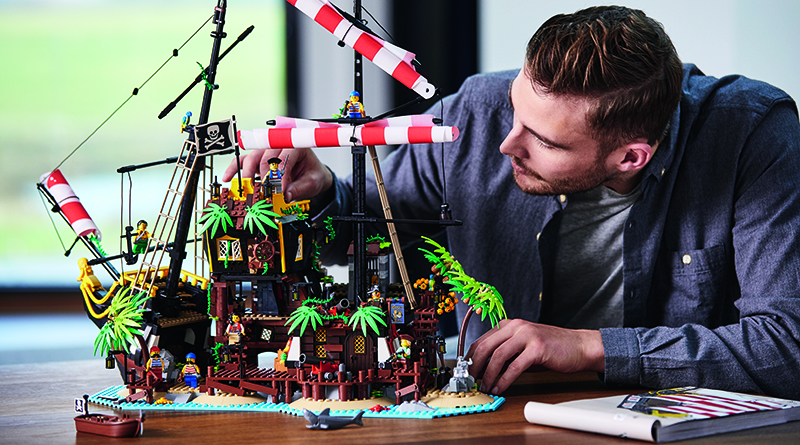 LEGO Ideas 21322 Pirates of Barracuda Bay will arrive on April 1, offering fans a 2,545 piece nostalgia trip into the world of LEGO Pirates. With updated versions of the classic Pirates characters, a modern design for 6285 Black Seas Barracuda and a compelling shipwreck island, it packs a lot into the box.

Beyond the Brick interviewed Model Designer Milan Madge and Senior Graphic Designer Austin William Carlson about realising this unique model based on Pablo Sanchez’s fan submission. Brick Fanatics picks out eight things they shared about this pirate-fest of a set…

The fan design needed to be modified

“The first process was to build Pablo’s model, and we struggled with a few elements of that. Things like the raised baseplate, no longer there, so we had to rethink the structure to get it to stay together,” says Milan. With certain elements unavailable and some of the building techniques not quite right for an official set, they had to come up with something a bit different.
“If we couldn’t deliver the exact thing that Pablo had submitted and everyone had voted for, then let’s deliver what Pablo had dreamt about.”

Black Seas Barracuda was back from the beginning

As soon as the team figures out what to do with the boat hulls, only one ship was being resurrected. Milan explains: “In his original submission, there were a lot of boat hulls and it was meant to look like a shipwreck village so we started going from there and thought what if these boat bits clip together, and we thought, if these boat bits clip together, what boat could it be? I don’t think there was any hesitation, I think everyone was, ‘Barracuda’.”

As a huge LEGO Pirates fan, Austin was very aware of how careful he had to be when designing the new Captain Redbeard. “There’s not too many minifigures where I’m like, ‘oh boy am I doing this right?’. Like this one I really had to pay attention to.”

He even got as deep as delving into the books that were released alongside the classic sets. “For the hardcore fans that read the Ladybird books, Anne Anchor is supposed to be Anne, that little girl from the books, she is now grown up and had more of a role handling the crew and such.”

The inspiration for the set came from the original 6285 Black Seas Barracuda set.

“I don’t know if you remember on the back of the original Barracuda box there is this story about Redbeard getting his crew and they set off at sea, and battle the tornado storms and things like this, and then it says ‘you continue the adventures with your own imagination’, or things to that effect,” says Milan. He then let his imagination loose to tell that story through this model.

“What we wanted to say is if the kids had continued that story, where has he been? Because he has been missing for years now. So we wanted to tell the story about where has Redbeard been in the years that LEGO has forgotten him.”

Classic elements were unavailable for the set

“When I first made Pablo’s original fan model, to build it I had to go out to charity shops and find old LEGO to build his model,” Milan reveals. “The baseplate and the boat hulls, the palm trees, the masts, the rigging, everything is 30 years old and some of that stuff we have had until recently, but if you don’t find the element in Pirates of Barracuda Bay that is because it doesn’t exist.”

Modern palm trees and boat hulls feature in the set, given that the originals have been out of production for so many years.

Getting the packaging right was important

The box for LEGO Ideas 21322 Pirates of Barracuda Bay adapts the classic packaging that LEGO Pirates came in 31 years ago. It was important for the team that the level of nostalgia continued through the box.

“We definitely have to give credit to Sam, our Design Lead for all of Ideas,” says Austin. “He really pushed to make sure this was the ultimate nostalgia product and the box is the selling point for this product. He definitely had quite a bit of battles to make sure the box got this way.”

Jose is a reference to the fan designer

A sign in the set reads, ‘Jose’s Inn’. Austin reveals who Jose is: “Jose is Pablo’s father’s name who got him into LEGO and LEGO Pirates and that is such a good connection. Because most of us know that we got into LEGO through a parent or another loved one or something like that, it is just a connection with that and such good memories. I am really happy we were able to get that through.”

The pirates can be the good guys, or the bad guys

On the Jolly Roger flag, the skull does not look angry – and it was a conscious design choice.

“The thing that’s nice about LEGO is that the kid can choose, I think old LEGO themes had that kind of freedom when you picked what you wanted,” Milan says. “The Pirates could be friends with the Imperials if you wanted them to be. For me, the design that Austin’s done on the Jolly Roger is reminiscent of that, it’s not an angry skull saying Pirates are the evil ones, make your own mind up, it’s as neutral as a skull and cross bones can be.”