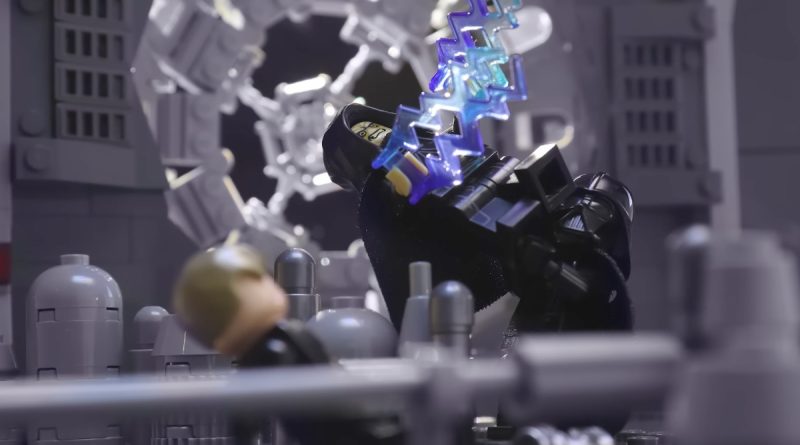 Two (or possibly three) brand new LEGO Star Wars dioramas are apparently on the cards for next year, all anchored around Return of the Jedi to mark the film’s 40th anniversary. Among those is 75352 Death Star Throne Room Diorama, which supposedly takes its cues from the final showdown between Luke Skywalker and Darth Vader aboard the second Death Star.

It’s a scene well represented in LEGO Star Wars playsets, but this would be the first time the theme has ventured into the lightsaber duel within the Diroama Collection. And while we don’t yet know what it will look like exactly – if it exists at all – it’s not hard to imagine a few possibilities. Chances are good that it would include at least Luke, Vader and Emperor Palpatine, for instance, potentially alongside a couple of Royal Guards.

In terms of the wider build, we could be looking at the area atop the stairs with Palpatine’s throne, in front of a window that offers views of the space battle above the forest moon of Endor. Or – and this is perhaps more likely, for a more dynamic way to display those minifigures – it could be the bridge over the shaft where the duel comes to a climactic conclusion, culminating in Palps taking a one-way trip to the Death Star’s core. (At least until The Rise of Skywalker, anyway.)

If that is the case, LEGO YouTuber hachiroku24’s latest build could give us some insight into what the LEGO Star Wars team may be going for in 75352 Death Star Throne Room Diorama. It’s much larger than the footprint any diorama will likely occupy, particularly with the set’s rumoured piece count of 807, but it’s not difficult to imagine getting even a slice of this build.

It would offer space for father and son to clash swords, for one, while also allowing LEGO Star Wars fans to recreate the scene where Vader chucks his boss to his doom, in the ultimate r/antiwork fantasy. The Royal Guards could then stand at an elevator at the end of the bridge, bulking out the set’s minifigure count with (hopefully) redesigned versions of the characters.

The very existence of 75352 Death Star Throne Room Diorama is not a sure thing yet, so don’t put too much stock in it turning up on shelves next year. (Conflicting reports suggest that set number could just as easily belong to a Jabba’s Palace Diorama.) But if the LEGO Group does have another Death Star diorama in store – following 75329 Death Star Trench Run Diorama and 75339 Death Star Trash Compactor Diorama – we’d absolutely take one like this.

Here’s a quick reminder of every LEGO Star Wars set currently rumoured for 2023: