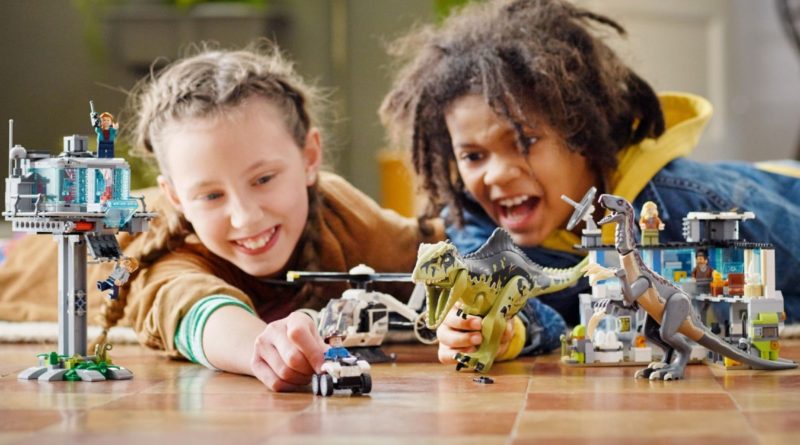 This means that a major set in the LEGO Jurassic World theme is now available with a hefty discount from Argos, just in time for the release of the new film. The retailer usually sells 76949 Giganotosaurus & Therizinosaurus Attack for £115, but currently has it for just £76. This represents a 35% saving on the full price, and is one that Jurassic World fans will be keen to take advantage of.

Click here to buy 76949 Giganotosaurus & Therizinosaurus Attack for £76 via our affiliate link.

Jurassic World: Dominion is set four years after Jurassic World: Fallen Kingdom, in an era where humans and dinosaurs are forced to share planet Earth. The film is notable for bringing back the three major stars of the original movie – Sam Neill, Jeff Goldblum and Laura Dern – who play Dr. Alan Grant, Dr. Ian Malcolm and Dr. Ellie Sattler respectively.

76949 Giganotosaurus & Therizinosaurus Attack recreates an as-yet unseen part of the movie, although (since licensed LEGO sets occasionally fudge details) it may play out a little differently on the big screen. The set depicts a large scientific facility dedicated to creating dinosaurs; an egg incubator, chunks of amber and various computer terminals can all be seen here. There’s also a watch tower and two vehicles, including a quad bike and a helicopter.

Of course, the characters in the set are the biggest draw. This model contains an exclusive figure of an older Alan Grant, as well as an older Ellie Sattler. Minifigures of Owen Grady, Claire Dearing, Dr. Wu and Kayla Watts can also be found here, as can the hulking Giganotosaurus and Therizinosaurus dinosaurs.

Keep in mind that Argos does charge a small fee for delivery, although it gives you some leeway on when this delivery occurs. Argos orders are also subject to local availability, so check it’s actually in stock for you to avoid disappointment.

Click through this affiliate link to browse the full LEGO range at Argos now.

If you’re interested, head over to Argos now to pick up the set. Jurassic World: Dominion roars into cinemas on June 10.