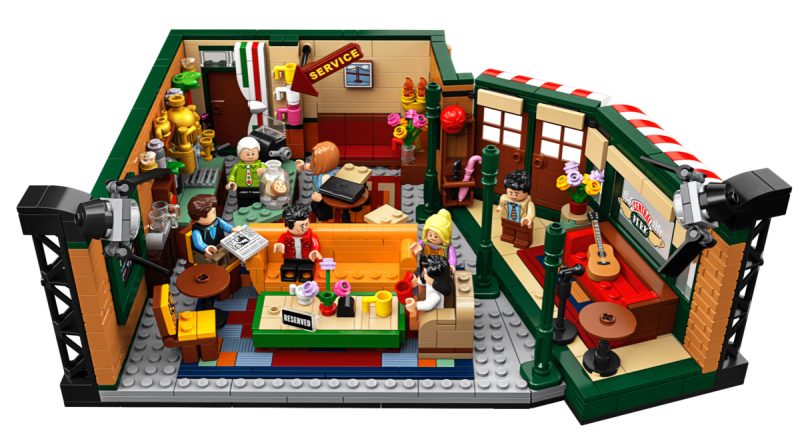 Thanks to John Lewis LEGO deals, you can save 20% on everyone’s favourite coffee shop, LEGO Ideas 21319 Central Perk.

Friends was a global phenomenon that introduced the world to Ross, Rachel and the gang. As often as not they could be found hanging out at New York’s most famous coffee shop, Central Perk, so it wasn’t a surprise when it was recreated in LEGO. Now you can pick up the set with a 20% saving, courtesy of John Lewis LEGO deals. This brings the price down from £69.99 to just £55.99, a saving of £14.00.

There are no codes to use, this offer is available to everybody, but it’s only going to be available for a limited time and for as long as stocks last. With the model indicated to be retired by the end of this year, this is likely to be a popular offer, so don’t leave it too long to grab your copy.

The design of this set is novel, insomuch as it portrays Central Perk as a filming location rather than just a coffee shop. All the familiar elements, like the counter with the coffee machine, the stage where Phoebe performs (plus her guitar) and the sofa that is central to Central Perk are included. But as well as that, brick built stage lighting indicates that this is a film set as well as a coffee shop.

And of course, the set wouldn’t be complete without the characters. Included in the set are all the Friends: Rachel, Monica, Phoebe, Joey, Ross and Chandler each get their own minifigures, as does lovestruck barista, Gunther. With 1,070 pieces, this set packs in a huge amount of detail, and will be a hit for any fan of the show. And who isn’t?

This set has been immensely popular since it was released in 2019, and with it retiring by the end of the year, many LEGO fans will want to grab their copy before it’s too late. So don’t delay if you want to add Central Perk to your collection at a fantastic 20% discount on the regular price. John Lewis offer a variety of options to collect your set; you can choose from postal delivery or click and collect at a number of locations including John Lewis and Waitrose branches.

Any LEGO sets that you buy via our affiliate links help to support Brick Fanatics. Thanks.