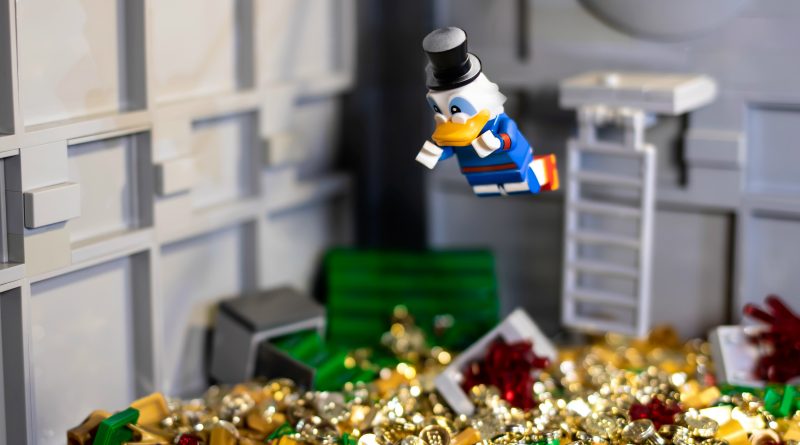 For Brick Fanatics Magazine Issue 6, Dimitri Nicomanis set Scrooge McDuck in his most iconic setting. Here, he goes behind-the-scenes of the Brick Pic of the Month

Growing up, Disney’s Duck Tales was one of my favourite cartoons. The theme tune was a constant ear worm, stuck in my head and even after all these years I’m finding myself humming it while writing this.

When the LEGO Group announced that Scrooge McDuck was going to be featuring in the second series Disney Collectible Minifigures. I knew I was going to pay homage to the opening titles of Duck Tales and recreate Scrooge’s famous  money pit dive. I had already built a smaller version as part of the recent 8×8 vignette series – but for the Brick Pic of the Month in Brick Fanatics Magazine, I needed to scale it up… a lot.

Brick Fanatics Magazine Issue 6 is available now, as either a single issue or part of a great value subscription package. As well as the final image showing Dimitri’s impressive build, the latest issue includes a look at the many LEGO Iron Man suits, an interview with Professor of Play and beautiful photography featuring the Creator Expert Ford Mustang.

The size of the vault is 22 x 28 studs and 18 bricks high. The walls are made of a mix of 1x6x5 panels, 1x4x3 panels and 1x2x3 panels. The advantage of using large panels is that it does not take many to build up a tall structure. The disadvantage is that, while perfect for the inside of a safe, they aren’t the most interesting pieces to look at. To break up the monotony I used 1×2 tiles attached to 1×2 bricks with studs on the side. I think it adds just enough detail and texture to the backdrop.

On the other side of the safe I used a 10×10 dish for the vault’s door, with a light bluish grey Technic steering wheel for the handle. To remain accurate to the source material, I also added a small platform and ladder. Once the vault was built I needed to fill it with valuables. I layered chrome gold coins and pearl gold coins, then scattered a mix of 1×2 green dollar bills, trans-red crystals and various pearl gold valuables (such as crowns and trophies) over the coins. I also used container boxes filled with trans-red crystals and dollar bills, then finally built a stack of dollar bills for the back.

In total there are roughly 800 individual LEGO pieces making up Scrooge’s loot, but I didn’t fill the whole vault and for good reason. I purposely made it bigger than I needed so I could position the camera low down, as close to the treasure as possible, helping to create a larger sense of scale.

For my first test shots I positioned Scrooge McDuck on the platform ready to dive in. It looked okay, but in order to create a sense of action I decided to go for a mid-dive pose. This was achieved by using modelling wire (light weight yet incredibly malleable) connected to Scrooge’s back with a piece of white-tack. I then moved the wire until everything was in the desired position. The wire was painted out later in Photoshop.

I used a spotlight to light the safe behind Scrooge and bounced a softer light up onto him to light his front and then used a few small LEDs, handily attached to large LEGO plates, to create the sparkle on the treasure.

I shot a number of takes, including a wider shot, a portrait shot, a macro version from low down and finally a shot of Scrooge bathing in all his cash – I always find its good idea to shoot options as sometimes you can stumble upon an unexpected shot that works even better than you had first imagined. This was a great deal of fun to build and shoot – and what’s more with all that LEGO gold now in my collection I feel as rich as Scrooge McDuck himself.

Brick Fanatics Magazine is available now from brickfanatics.com/magazine, as a single issue or part of a great value subscription deal.