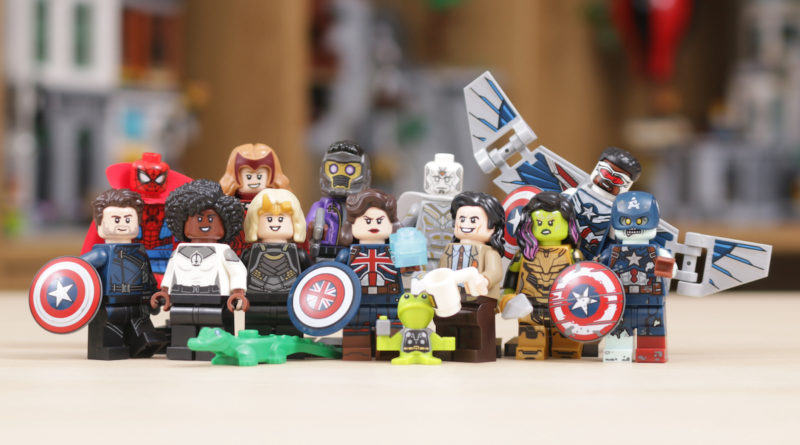 The first series of LEGO Marvel Collectible Minifigures is now available, but could 71031 Marvel Studios have featured even more characters?

71031 Marvel Studios includes 12 unique minifigures from across the most projects in the Marvel Cinematic Universe, bringing to them an amount of detail and new elements that could only be afforded to Collectible Minifigures.

Sticking to the Disney+ shows, here are six more characters that also deserved a spot in the first LEGO Marvel minifigure series.

As the main antagonist and surprise villain of WandaVision, Agatha Harkness inserted herself into The Scarlet Witch’s alternate reality and used her own magic to steer Wanda on the path she needed to be able to take her powers.

With a multitude of designs to choose from, Agatha Harkness’ most iconic appearance is from the final episode where she wore a long, flowing set of robes evoking an era of witches long since passed. A minifigure could make use of a sloped piece instead of the legs and some suitably messy hair, with a twisted but confident face print.

Whilst 71031 Marvel Studios had more than a few elements of Captain America representation, one key character from The Falcon and the Winter Soldier is still missing from the range.

US Agent, otherwise known as John Walker was the anti-hero of the series who aimed to become the new Captain America. Unfortunately, his methods weren’t quite in line with those that come with the iconic shield and that role was swiftly taken from him and fulfilled by Sam Wilson. A minifigure of this character likely wouldn’t bring any new elements to the range, with simple reprints of existing pieces to match his costume.

As another key character from WandaVision, Darcy Lewis played an instrumental role in bringing down the hex barrier using her wits, cunning and charm. Whilst she may not have a super-suit, her alternate reality uniform was eye-catching, to say the least.

When the S.W.O.R.D base was transformed into a circus by The Scarlet Witch, Darcy received a striking red and blue coat, emblazoned with golden buttons. Such a design could make for a diverse collection of minifigure parts to introduce into the portfolio, while still representing the character.

As one pair of Loki duo in the titular series, Mobius was unfortunately left out of 71031 Marvel Studios. The character, portrayed by Owen Wilson, was an Agent of the Time Variance Authority responsible for keeping Loki in check.

More details were revealed about the truth behind Mobius and the rest of the TVA as each episode aired, eventually revealing his love of Jet Skis, a potential accessory for his Collectible Minifigure.

Heist Nebula, the happier version of the character from Marvel’s What If…?, might not be the most interesting of potential minifigures in terms of new pieces, but it could help to bring a collection of Marvel pieces back for collectors.

The last appearance of Nebula in a LEGO set was in 76131 Avengers Compound Battle, where she was wearing the same white travel uniform as the other Avengers. This means that her purple outfit has yet to feature in a set since 2017. Bringing Heist Nebula to minifigure form could offer a chance to redesign, or reintroduce the torso and legs for future use.

The third episode of Marvel’s What If…? saw Earth’s mightiest heroes fall one by one before they ever had a chance to assemble. As S.H.I.E.L.D searched for the killer, it was soon discovered that Hank Pym was seeking revenge for the loss of his daughter.

Embracing a design similar to Yellowjacket from Ant-Man, a minifigure for this version of Hank Pym could combine the two minifigures into one, with the included accessory being the original needle that he hijacked to get rid of Tony Stark.