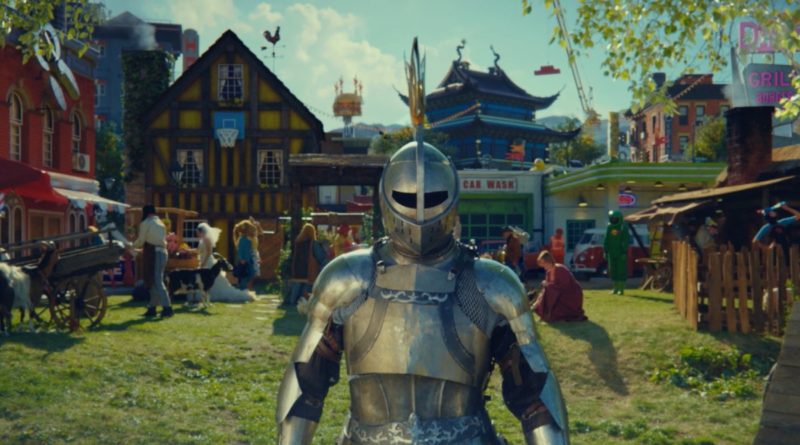 The LEGO Group has launched a new advert for the Rebuild the World campaign, and it features a few hidden sets that we’ve managed to find.

Much like the original Rebuild the World video, a selection of official creations makes their TV debut in the advertisement, which includes a knight on a quest to cross a river in his heavy armour.

From Creator to Castle, here are six models that we found in the new LEGO video, and where to see them for yourself:

Featured in the most reference-filled scene of The Damp Knight’s tale is an older entry into the Modular Buildings Collection. 10182 Café Corner’s iconic brick-built sign can be spotted displayed on the side of a building, which in itself doesn’t appear to be the original model. When the knight is facing the camera, this Easter egg can be seen.

Another potential find in the same scene listed above is the classic Castle 10193 Medieval Market Village. The recognisable timber-framed housing with two windows found in the set is replicated here, with the tan colouring replaced by a bright yellow, possibly due to the design of 31120 Medieval Castle. Whilst this might not mean a return of the popular build, the advert may be teasing more LEGO goats.

Another memorable Modular Building sign is the next entry, again featured at the moment where the knight is directly facing the camera. The build for the decoration found in 10246 Detective’s Office is displayed on what is likely the office itself with the ‘pool’ writing instead coloured yellow. This combined with the timbered house might mean that yellow proved easier for audiences to spot during tests for the video.

Moving away from Modular Buildings, the Rebuild the World advert references LEGO CITY with another decorative sign featuring the flaming burger from 60214 Burger Bar Fire Rescue. In the original set, the fire was there for the firefighters to put out, suggesting that there may have been an accident in this particular LEGO town.

As one of the brighter Easter eggs featured on the right-most side of the same scene, another brick-built sign can be spotted this time originating from Creator Expert 10260 Downtown Diner. The pink plastic letters can be spotted in another configuration in a standing advertisement for the restaurant, suggesting that this version of the Diner might not be integrated into a larger building, or at least has a separate display.

Rounding out this search for sets is a pair of vehicular models from Creator Expert. Appearing once towards the end of the advert is 10265 Ford Mustang, bringing some more minifigures to help in the construction of the bridge. Alongside the car is none other than a Volkswagen Camper Van, with the red colour scheme referencing 10220 Volkswagen T1 Camper Van.