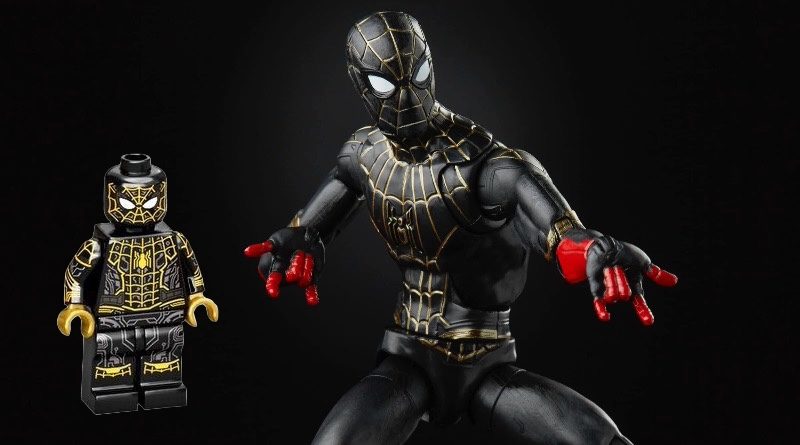 New Spider-Man: No Way Home merchandise has revealed the source of the mysterious black-and-gold LEGO Spider-Man minifigure, suggesting the new sets are all based on the upcoming movie.

While 76195 Spider-Man’s Drone Duel and 76184 Spider-Man vs. Mysterio’s Drone Attack are labelled as being inspired by Spider-Man: Homecoming and Spider-Man: Far From Home respectively, their choice of minifigures implies they may actually be based specifically on Spider-Man: No Way Home – and could therefore represent a massive spoiler.

That theory has now been backed up by the reveal of more merchandise for Spider-Man: No Way Home, including Funko Pop and Marvel Legends figures. Both of those toy lines include a black-and-gold-suited Spider-Man – just like the mysterious minifigure bundled into 76195 Spider-Man’s Drone Duel, which seemingly has no source from any previous movies or comics.

If the same suit is appearing across other merchandise, it suggests that the minifigure isn’t of the LEGO Group’s own invention – but will actually be a key part of Spider-Man: No Way Home. And if that is the case, it stands to reason that 76195 Spider-Man’s Drone Duel is actually based on the upcoming threequel (regardless of what the box claims).

We already know that Doctor Strange will play a role in the new movie, and given his next solo outing is subtitled ‘in the Multiverse of Madness’, we can also assume that Spider-Man: No Way Home will delve further into the concept of the multiverse. Taking into account the three LEGO sets arriving in October, that could mean visiting alternate-reality versions of the first two MCU Spidey movies.

The box art for 76195 Spider-Man’s Drone Duel and 76184 Spider-Man vs. Mysterio’s Drone Attack would therefore be technically correct (which is, as we all know, the best kind of correct), because the sets would be inspired by a version of Spider-Man: Homecoming and Spider-Man: Far From Home.

We likely won’t know for sure until Spider-Man: No Way Home arrives in cinemas on December 17 (unless a trailer clues us in before then), but what was initially a far-fetched theory is now starting to look a little more likely…