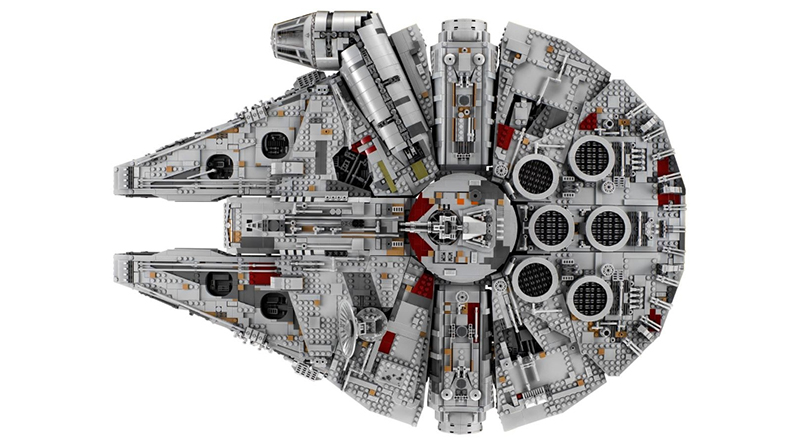 The LEGO Group continue to break their own records with the biggest sets ever, but which models have managed to make their mark on brick history?

With the release of 31203 World Map comes the time to update our ranks of the biggest LEGO sets ever with many massive and interesting models filling the list.

From original creations to builds based on worlds far, far away and full of magic, here are the six largest LEGO models that have ever been officially released for purchase:

71741 NINJAGO City Gardens was created for the 10th anniversary of LEGO NINJAGO and features a multi-storey model that stretches into the skyline of any LEGO collection. Designed to fit in with the other NINJAGO City sets, it includes just as much colour, detail and eye-catching references to the LEGO Group’s history and that of the NINJAGO TV show.

While the world of NINJAGO may not be as recognisable as some of the other pop culture icons and landmarks in this list, 71741 NINJAGO City Gardens is still one of the most ambitious and biggest sets ever released at 5,685 pieces, and you can find out more about the model’s many details in our review.

This particular model has been re-released and remade. The former version is 10189 Taj Mahal (both have a similar piece count), and the remake is the new-for-2021 Architecture 21056 Taj Mahal, proving how memorable this location has become to the LEGO Group.

The original build remains one of the largest LEGO sets of all time at 5,923 bricks, with the four spires surrounding the timeless shape of the main domed building. Although both previous models are now unavailable, the newer and more budget-friendly 21056 Taj Mahal is out now.

Journey to a world of magic and wizardry with the largest LEGO Harry Potter set, 71043 Hogwarts Castle at 6,020. This microscale castle includes everything you need to recreate your favourite scenes from the movies, such as the iconic moments when the rowboats of students sailed towards their new home of Hogwarts.

A full interior is included with many recognisable rooms for the 27 microfigures to populate. Minifigures aren’t left out of the model either with the four founders of the Hogwarts houses represented exclusively in this set. 71043 Hogwarts Castle is available now from the official online store.

There’s no denying that 75192 Millennium Falcon stands out amongst any LEGO collection, not just for its shape as the iconic spacecraft from a galaxy far, far away, but also for its massive size and scale. 75192 Millenium Falcon is one of the most expensive LEGO sets of all time and comes in at 7,541 pieces and 10 minifigures.

You can read our review to see why this huge model would make a fine addition to your collection then head over to LEGO.com where the set is still available following its launch in 2017.

The second landmark on this list is 10276 Colosseum, once the largest LEGO model of all time. This set contains 9,036 bricks and is sure to take up quite a bit of room in your home. However, it’s more than worthy of the space it takes up.

As stated in our review, 10276 Colosseum is a time-consuming and challenging build that makes an unforgettable final model. Although it may have once reigned supreme as the biggest LEGO set, one has risen to take its place…

Not only does 31203 World Map contain the most LEGO pieces in a single set ever at 11,695 elements, but it’s also a scientific model. The oceanic overlay that brings a splash of colour to the otherwise monotone build is one of bathymetry, measuring the depth of the deep blue seas.

However, as with any LEGO set, 31203 World Map encourages creativity, from rearranging the view to display your home country in the centre to mixing up the oceans to display different designs. The world’s biggest LEGO set is out now on the official online store, so don’t miss out on this piece of brick history.