Another of the best Batman villains gets her own wacky vehicle, with 70921 Harley Quinn Cannonball Attack giving Joker’s right hand woman an explosive entrance

The LEGO Batman Movie sets were among the best released last year, and this year brings us another round. Has the level of quality remained, or is the theme wearing out its welcome? Let’s take a look at 70921 Harley Quinn Cannonball Attack, a set that introduced another new vehicle along with three characters from the Rogues Gallery, and see what it brings to the table. 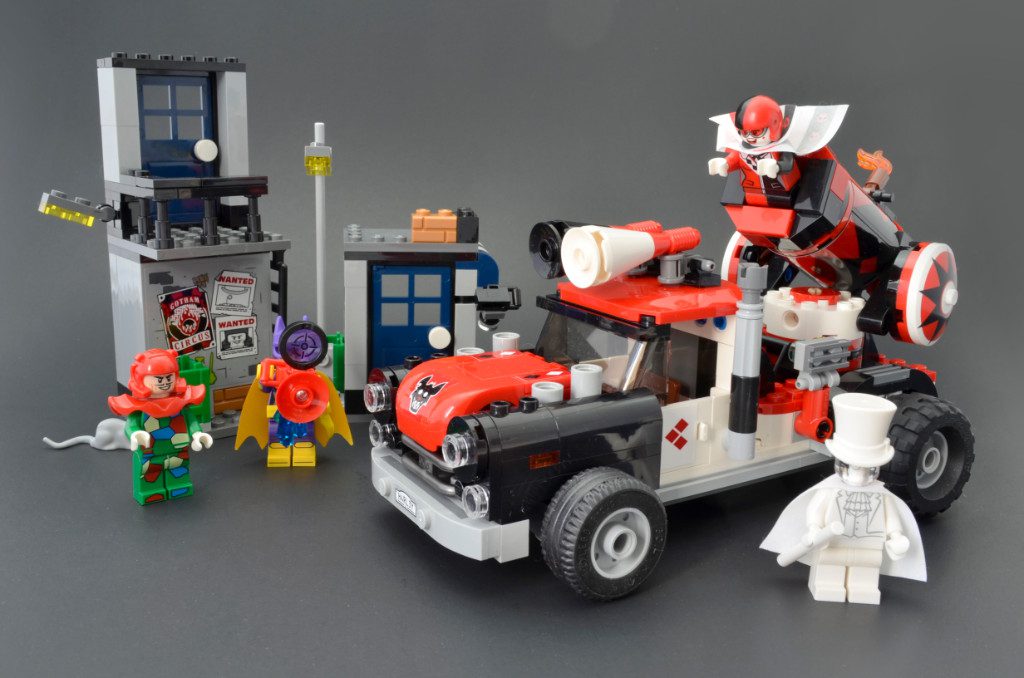 While there are a few location based sets in the theme, The LEGO Batman Movie sets have been overwhelmingly vehicular in focus. Almost all of these vehicles have been amazing in one way or another, and it’s clear a lot of thought went into the design process. 70921 Harley Quinn Cannonball Attack more or less keeps in line with this trend. The overall shaping of the truck is great, with a classic 1950s feel. This is a great callback to the aesthetic of Batman: The Animated Series. It also has a suitable circus quality. The truck is packed with great details, and some interesting parts usage in places like the front grill. This detail even extends to the motor, which is an unnecessary yet very welcome touch. The cannon is well articulated and can be aimed in a wide variety of directions. The firing mechanism, while functional, is a bit underwhelming. It would have been nice to see something spring loaded, or at least with a different plunger at the end.

Now, while the overall look of the truck is great, there are some minor problems, most notably that the wheels stick way out from the body. Instead of being properly nestled beneath wheel wells, the wheels just feel slapped onto the side of the vehicle. At certain angles, this fact is slightly less noticeable. The LEGO Group has become quite adept at shooting sets from the most agreeable angles for their promotional materials, a fact to which anyone who owns last year’s 71042 Silent Mary can attest. On the upside, this does leave open the opportunity for the creatively minded fans to modify the set to improve its look.

The rest of 70921 Harley Quinn Cannonball Attack is pretty ho-hum. There are a couple of building sections, the smaller of which being the more interesting. This smaller building has an ATM, security camera, and light post. Much of the detail of the larger building is achieved with a large sticker featuring wanted posters and an advertisement for the Gotham circus. Sadly, neither structure really adds to the appeal of the set.

The final part of the set – and likely the main draw for a large number of fans – is the minifigs. The titular Harley Quinn is yet another exclusive version of the character. While fun, it’s hardly the most interesting version of her. It would have been nice if in addition to the helmet, she came with an alternate hair piece with her signature pigtails. Still, her striped cloth cape is great, with red and black skulls printed throughout.

The other two villains in 70921 are from the hilariously obscure back catalog of Batman’s rogues gallery, Crazy Quilt and The Gentleman Ghost. These two figures are on opposite sides of the quality spectrum. Crazy Quilt’s costume is fine, but his helmet and shoulder pads are highly inaccurate to the character, both in color and design. At the very least, the designers could have included the lights on the helmet used to hypnotize his enemies. These appear in The LEGO Batman Movie itself, but not on the figure included here.Gentleman Ghost on the other hand looks great, and is a terrific representation of the character. The designers have even included a printed monocle on his clear head. It’s hard to see at a lot of angles, but it’s great that it’s included.

Finally, and almost hardly worth mentioning is yet another Batgirl. This is the same figure included in so many other sets from the theme, so if you have any of the others, she’ll be a bit of a letdown in this set. It would have been nice to see her in a different costume here.

Overall, this set is a fun addition to the theme, and offers a great starting point for modders. At it’s regular retail price, it feels a little pricey. If you’re able to find it with a 20-30% discount though, it’s a pretty easy recommendation.