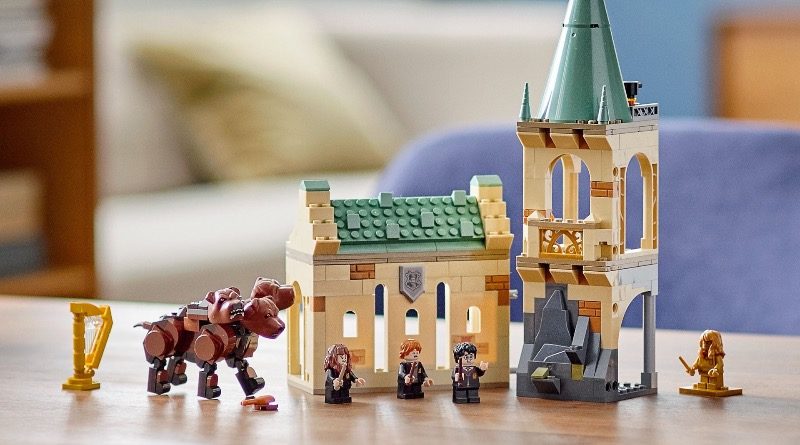 We’re not exaggerating when we say that one of the new LEGO Harry Potter sets contains what may be one of the most egregious stickers of all time.

That’s not so much in the content of the decal, which is relatively harmless, but in exactly where it’s applied. The offending set is 76387 Hogwarts: Fluffy Encounter, one of three new Harry Potter 20th anniversary models that can combine into a huge, wide and flat wizarding school display.

You can read our full review of the 397-piece set here, but to summarise: it slots in okay with the rest of the Hogwarts models, but isn’t much cop on its own. That’s not necessarily because of this one sticker, but it also doesn’t help it in any way. And given it’s otherwise pretty bare bones, 76387 Hogwarts: Fluffy Encounter needs all the help it can get.

To cut to the chase: the decal in question sits on the inside of the sand green roof cone, which has swapped from the grey of recent Hogwarts sets in a nod to the classic 2001 Harry Potter wave. As you’ll know if you’ve built your fair share of LEGO sets, but most recently the January 2021 range of Harry Potter textbooks, placing stickers on the inside of any panel is an absolute mare.

But when that panel is also curved and sloped, you’ve basically got no chance of aligning it correctly. It took us a good six or seven tries to lay the thing down in a position that didn’t make us silently weep, which isn’t really the experience you want in building a LEGO set. And to add insult to injury, that sticker sits on transparent backing.

That’s great for colour-matching – particularly given stickers are notorious for not coming in at the same shade as the bricks they sit on – but very, very bad for fingerprints. Especially when you’re picking it up and putting it down over and over again. Which you will. Because it’s the inside of a sloped and curved piece, where no stickers should ever, ever go.

But, you know. Don’t let us put you off 76387 Hogwarts: Fluffy Encounter. Especially if you want to combine all the Hogwarts sets, like so…