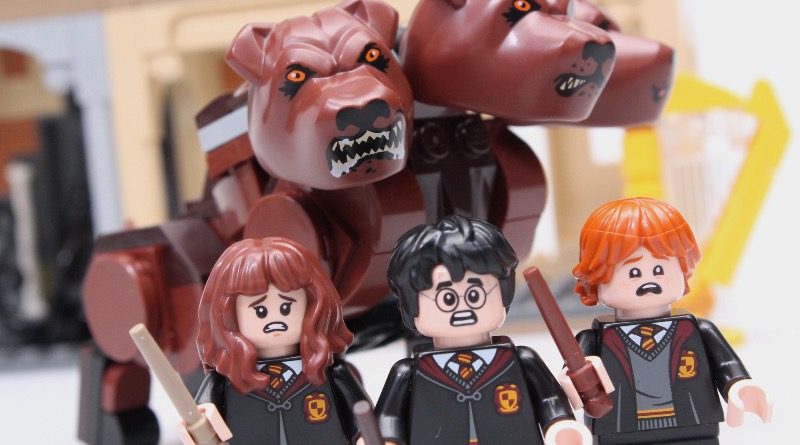 Cast your mind back to 2001 (or, if you’re too young to remember that year, hit up Google and stop parading your youth in front of the rest of us, thanks), when the LEGO Group was gearing up to debut only its second-ever licensed theme in Harry Potter.

Twenty years later, we’ve now come full circle with a wave of sets that celebrates those classic models by distilling their essence – namely their modularity, but also their inherent LEGO charm – into a renewed line-up that’s in some ways subtle, but in others very overt in paying tribute to its ancestors.

76387 Hogwarts: Fluffy Encounter falls very clearly into that latter category, taking the premise of 4709 Forbidden Corridor – Fluffy the three-headed dog guarding a trapdoor above the Devil’s Snare – and remixes it into a modern-day build. But can a premise that seemed only slightly solid in 2001 hold its own in 2021?

The build starts with Fluffy, and the approach to the three-headed dog is really emblematic of the set as a whole. Some of it works – the articulation offered by the brick-built legs; the texture, size and detail across the body and heads – but inevitable compromises and weird design decisions let it down.

The colour-locked light grey ball joint receivers are an obvious point to criticise, but the printing across the three heads is just puzzling. The effect created by having one head awake, one half asleep and one fully asleep works in display: turn Fluffy one way and he’ll seem alert and ready; spin him 180 degrees and he’s fast asleep.

It seems bizarre beyond the context of the set’s otherwise empty third-floor corridor, however, and therefore in any potential play scenario that doesn’t involve cramming the pooch into that confined space. A separate set of interchangeable heads would have worked much better, even if it did bump the price up ever so slightly.

The harp comes next, and it’s a nifty build, but between them these two assemblies represent most of the creativity in 76387 Hogwarts: Fluffy Encounter. The structure itself, while partly aping the layout of 4709 Forbidden Corridor, feels the most basic of all the Hogwarts sets in this wave – including even 76386 Hogwarts: Polyjuice Potion Mistake, which packs more detail into its single room than this set manages across its entire interior.

The colours work nicely, particularly the grey linking to the Chamber of Secrets (even if the Devil’s Snare should lead somewhere else in-universe), but it’s a shame that same visual flow across this wave doesn’t extend to the narrative within the standalone 76387 Hogwarts: Fluffy Encounter.

In fact, this is really where departing from the layout of 4709 Forbidden Corridor has let the revised version down, because the Devil’s Snare is positioned adjacent to Fluffy and the third-floor corridor. The trapdoor beneath the dog therefore goes nowhere in the default configuration on the front of the box, while moving the two stacked rooms underneath leaves you with a superfluous roof.

Neither of those layouts is ideal, which means you really need to combine this with both 76389 Hogwarts Chamber of Secrets and 76386 Hogwarts: Polyjuice Potion Mistake to make the most of what’s on offer.

Oh, and it also has the singularly worst sticker placement of all time, on the inside of the sand green roof cone. So there’s that.

Just like the smallest set of the 20th anniversary wave, 76387 Hogwarts: Fluffy Encounter falls back on our well-represented trio of Harry, Ron and Hermione, then throws in a golden Hermione for good measure. That character selection makes sense given the scene this set depicts, though, and the variety in the torsos – Harry’s robe is closed here, but open in 76389 Hogwarts Chamber of Secrets – is welcome.

By comparison, there’s not a lot to grumble about here in terms of price – and even taken in isolation, you won’t feel too hard-pressed to pick up 76387 Hogwarts: Fluffy Encounter as a companion to 76389 Hogwarts Chamber of Secrets. (Indeed, that is really its best role.)

While the other two Hogwarts sets in this 20th anniversary wave are capable enough to stand alone – even 76386 Hogwarts: Polyjuice Potion Mistake, which is just a single room – 76387 Hogwarts: Fluffy Encounter feels disappointingly lacking by comparison.

The ideal layout for both narrative flow and visual punch requires the addition of 76389 Hogwarts Chamber of Secrets at a minimum, and the brick-built Fluffy – while well-articulated and intelligently designed – is let down by obtrusive ball joints and strange printing.

When it becomes part of something larger in combination with both other Hogwarts sets, the value increases accordingly, so it’s definitely worth picking up if you’re eyeing the entire new batch of 20th anniversary Hogwarts sets. In prioritising that modularity, though, 76387 Hogwarts: Fluffy Encounter mostly forgets to stand on its own two feet, and that makes it a tough solo recommendation.

How long does it take to build LEGO Harry Potter 76387 Hogwarts: Fluffy Encounter?

76387 Hogwarts: Fluffy Encounter comes together in around 40 minutes. Fluffy is fiddly and there’s a nightmare sticker, but the main building is incredibly basic.

How many pieces are in LEGO Harry Potter 76387 Hogwarts: Fluffy Encounter?

In the configuration printed on the front of the box, 76387 Hogwarts: Fluffy Encounter measures 30cm tall, 19cm wide and 7cm deep.

How much does LEGO Harry Potter 76387 Hogwarts: Fluffy Encounter cost?