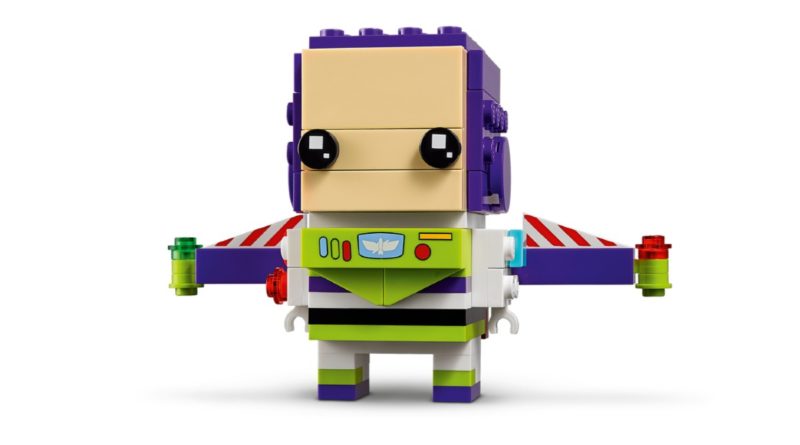 A trio of new LEGO BrickHeadz based on popular Disney Toy Story characters has been revealed via a listing on the official online store.

The Malaysian version of LEGO.com has brought us the first look at LEGO BrickHeadz 40552 Buzz Lightyear, as well as an additional peek at two other brick-built caricatures for Woody and Bo Peep.

The official online store has revealed the new BrickHeadz with the listing being for 40552 Buzz Lightyear and smaller images of the two other models featuring on the back of the box. The main build depicts the popular character with his wings spread out and the purple hood wrapping around the head, as well as a printed piece including the details of his Space Ranger suit.

A 360-degree video view of the set also gives us a look at the back of the BrickHeadz, with a silver stud and hinges that allow the wings to fold in. As seen on the back of the box, Woody features a printed element for his sheriff’s outfit and his signature hat. A lasso is also included.

Bo Peep is wearing her updated outfit from Toy Story 4 with a purple cape and light blue outfit, holding the curved staff in her right hand. These two brick-built figures have the same set number, suggesting that Woody and Bo Peep will be featured in a BrickHeadz double pack. No listing for them has yet to be added to the official online store.

Due to the Malaysian storefront directing through to certified LEGO locations, there is no word on the price or release date of LEGO BrickHeadzs 40553 Buzz Lightyear. It may be that it releases before the arrival of Lightyear on June 17, 2022, with another version of the character starring in the film and other models rumoured for the movie.