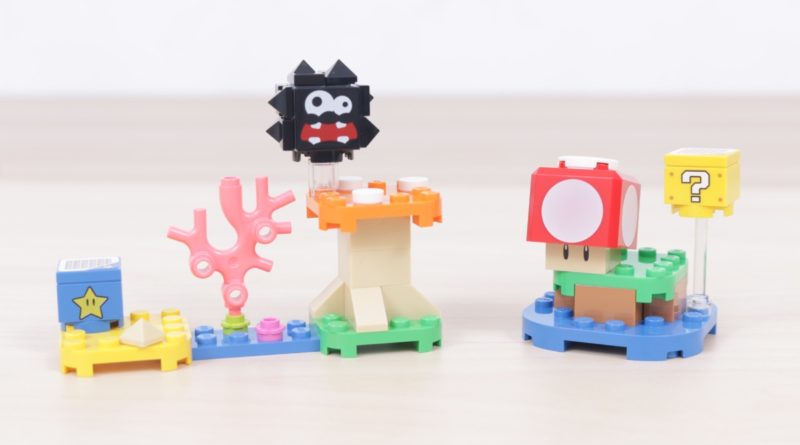 Qualifying orders at LEGO.com will receive two free LEGO Super Mario polybags from March 10 through 24, or while stocks last, to celebrate Mario Day.

Spend £60 / $60 / €60 on LEGO Super Mario sets from March 10 to 24 at LEGO.com (and presumably in LEGO Stores) and you’ll come away with two extra polybags, in the form of 30385 Super Mushroom Surprise and 30389 Fuzzy & Mushroom Platform. Both tiny expansion sets will help to flesh out your buildable courses just that little bit further, each bringing a new interactive element to the table.

30385 Super Mushroom Surprise includes both a Super Mushroom and Question Mark Block, offering new power-ups and bonuses for your digital Mario or Luigi figure – helping them to get through the increasingly complicated courses now available to build through the theme’s myriad expansion packs.

30389 Fuzzy & Mushroom Platform, meanwhile, introduces a new enemy for your character to overcome and a Super Star Block to give them the power to do so. Invincibility is a great tool to have in your back pocket for any LEGO Super Mario course – just saying…

Neither polybag is new – one debuted in August 2020, while another followed in August 2021 – but they’re both exactly the kind of generic course-builders that are worth amassing multiples of anyway, so you can’t really go wrong grabbing a couple for free with qualifying LEGO Super Mario purchases. And if you were planning on picking up any Mario sets this month anyway, they’re a neat little bonus.

Remember, you’ll need to spend at least £60 / $60 / €60 specifically on LEGO Super Mario sets from March 10 to 24 (or while stocks last) to see these polybags added to your order. If you’re looking for something to buy, the LEGO Group has also launched three preconfigured bundles of LEGO Super Mario sets, each of which includes bonus VIP points and My Nintendo points:

Update: the LEGO Super Mario polybag promotion will not be available in the following countries due to a stock issue in one of the LEGO Group’s warehouses: Austria, Switzerland, Czech Republic, Estonia, Greece, Hungary, Italy, Lithuania, Latvia, Poland, Slovenia and Slovakia.

A third digital figure will join Mario and Luigi later this year in the form of Princess Peach. Take a first look at that brand new character – and 71408 Princess Peach’s Castle – by clicking here.