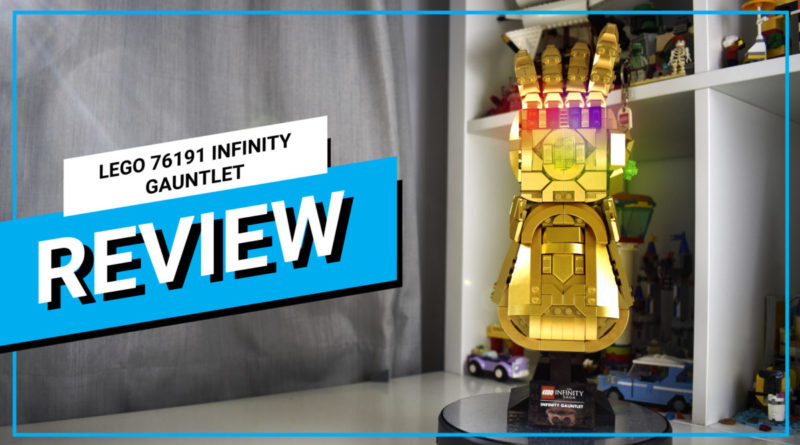 Watch LEGO Marvel 76191 Infinity Gauntlet come together in a snap in our video review of the 18+ golden glove.

We’ve already reviewed the record-breaking 590-piece display model with static words and pictures, but if you prefer your LEGO reviews to use more modern mediums of sound and moving images – check us out, firmly in the 20th century – head on over to our YouTube channel (or hit play on the video below) to check out a video review of 76191 Infinity Gauntlet.

It’s more than three decades since one of the most dangerous tools in the Marvel universe was first committed to print, but only seven months or so since the LEGO Group enshrined it in shiny, golden plastic, complete with all six Infinity Stones. If you’re still mulling over whether to pick it up, we’ll just remind you that fun should be something one considers when balancing your LEGO collection.

76191 Infinity Gauntlet is available now from LEGO.com for £69.99 / $69.99 / €79.99. That’s a £10 / €10 price increase since launch, which happened at the same time as the rest of the LEGO Group’s price adjustments in January. You do get a record-breaking number of shiny, drum-lacquered gold elements for your money, though.

If Thanos’s weapon of mass destruction (let’s call a spade a spade) is on your shopping list, you’ve still got plenty of time to pick it up: it’s currently not due to retire until the end of 2023. That could change in a flash, though, so keep an eye on Brick Fanatics for future updates to our retiring soon lists.

Support the work that Brick Fanatics does by purchasing your LEGO using our affiliate links, and subscribing to our YouTube channel. Thank you!