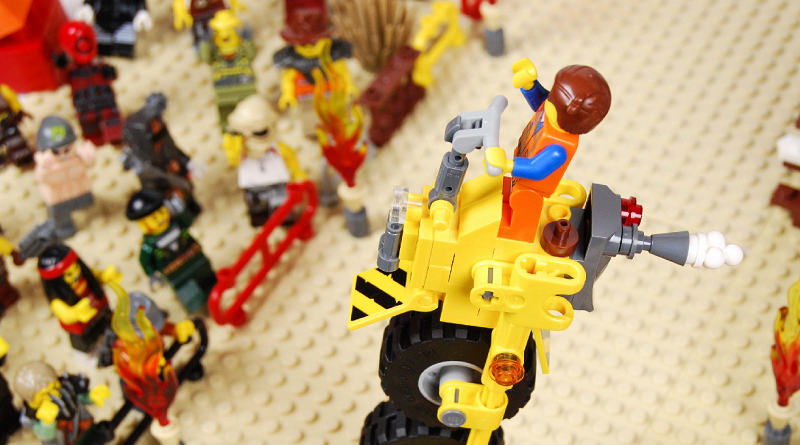 It is time for the stars to arrive at the The LEGO Movie 2: The Second Part Apocalypseburg premiere

The worldwide premiere of The LEGO Movie 2: The Second Part takes place today in Los Angeles, a special screening is happening in London and most importantly, there is a star-studded premiere taking place in Apocalypseburg.

Throughout the day, Brick Fanatics will be sharing exclusive shots captured by the minifigure reporters who are attending the most glamorous bash since the short-lived Taco Tuesday victory celebration.

Everything starts with the arrival of the stars, who walk the hastily assembled red carpet as adoring fans look on. If they are lucky, they might get an autograph from one of the stars or snap a great photograph of their favourite screen personality.

The fans are most excited to see Emmet, and they all get a great view as he turns up on his Thricycle. He is shortly followed by Metalbeard, who arrives in the most ostentatious way possible, building himself into a Heavy Metal Motor Trike.

Ultrakatty arrives next, shortly followed by Rex Dangervest – being the dangerous, tough and awesome guy that he is, he speeds right up to the end of the carpet in his Rextreme Offroader and screeches to a halt.

Check back soon as the fashion reporter checks out what the stars selected to wear to walk the red carpet in.

To see more of the impressive Apocalyspeburg build, Issue 2 of Brick Fanatics Magazine is available to purchase now.

The LEGO Movie 2: The Second Part is available now at shop.LEGO.com. You can help support Brick Fanatics’ work by using our affiliate links.