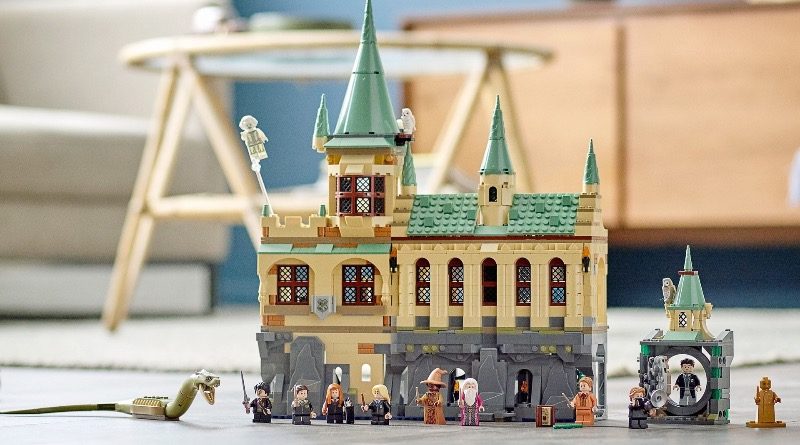 This summer’s LEGO Harry Potter 20th anniversary sets tip their collective hat to 2001 with sand green roofs – but does changing them to grey make them fit the current Hogwarts line-up any better?

That’s the question posed by Ashnflash, who’s worked some kind of Photoshop black magic on 76387 Hogwarts: Fluffy Encounter and 76389 Hogwarts Chamber of Secrets to adapt them to the style of 75954 Hogwarts Great Hall, 75948 Hogwarts Clock Tower and 75969 Hogwarts Astronomy Tower.

That mostly involves swapping the sand green roofs – which are a nod to the classic aesthetic of 4709 Hogwarts Castle, 4730 The Chamber of Secrets and so on – for dark grey, matching the more streamlined (and authentic) design of the renewed Wizarding World theme.

However, Ashnflash has gone one step further by also switching the new sets’ Unikitty horn elements – used for the castle’s spires – for the sand green ski poles employed by the 2018-2020 models. It’s a tiny touch, but one that really helps sell the transformation between the two styles.

You can see the results in full – along with the YouTuber’s working process – by hitting play on the video above. While the boxy nature of the new models creates a purely horizontal display, and therefore doesn’t quite fit with the sprawling, angled aesthetic of the recent Hogwarts sets, something as simple as changing the roofs really does go a long way to making them mesh together a little easier.

Some major modification will still be required to adjoin 76389 Hogwarts Chamber of Secrets with the rest, given it has an underground area beneath its Great Hall (which itself would need to be repurposed to fit in with 75954 Hogwarts Great Hall).

But because these sets are totally modular, removing the Chamber of Secrets from the equation entirely would theoretically also allow you to just add the new above-ground sections to your existing Hogwarts setup.

And by switching the sand green roofs and Unikitty horn elements, they should fit in much better than first appearances would suggest – particularly because the Technic pin connections occupy the same spacing as the current Hogwarts sets.

You’ll be able to try it out for yourself when the 20th anniversary LEGO Harry Potter sets launch on June 1. In the meantime, keep an eye on Brick Fanatics for our initial reviews of the line-up in the days to come.