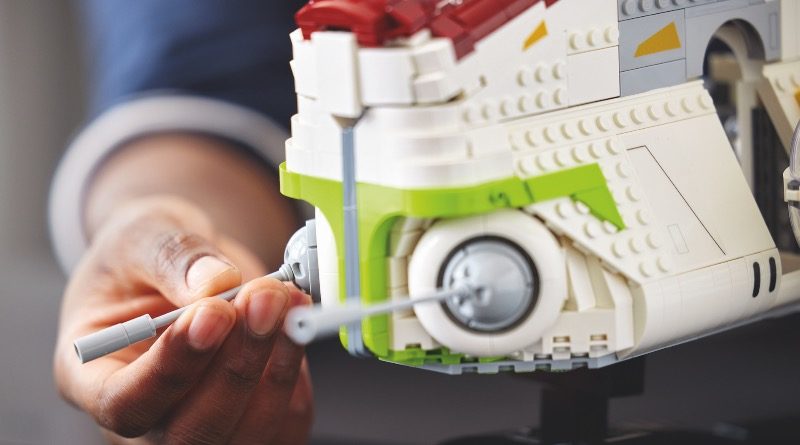 LEGO Star Wars 75309 Republic Gunship uses exactly the same pieces for its laser cannons as smaller, minifigure-scale versions of the vehicle – but the design team says there’s a very good reason for it.

At first glance, the ball joint turrets situated at the front of 75309 Republic Gunship suggest that either this set or its predecessors – all of which have been built around minifigures – are wildly out of scale. That’s because both iterations of the vehicle employ the same rotating elements for the same purpose, even while one is twice the size of the other.

From where we’re sitting, there’s a pretty obvious reason for that: these are the biggest ball joints in the current part library. But designer Hans Burkhard Schlömer has now revealed to Brick Fanatics (and other LEGO Fan Media) why the team decided to stick with those elements, rather than introducing a supersized ball joint – and why they actually ended up being the perfect solution.

“One decision we made earlier helped us greatly,” Hans explains. “I was working on the first version of 75273 Poe Dameron’s X-wing Fighter, and I was looking at the engines and air intakes, and I wasn’t happy with what I saw there. It didn’t really look like in the movie.

“I went to Jens [Kronvold Frederiksen, LEGO Star Wars Creative Lead] and asked him, ‘Can we make new elements for the air intakes, something round and curved, maybe two pieces?’ And Jens said, ‘Well, let’s make it a quarter piece. That way, it’s way more versatile.’ And they were indeed very versatile, and came in really handy in building these big ball gunnery emplacements.

“In fact, I think it even looks better than if it were just one big grey ball, because this is really how it looks in the movie. It’s like a white case around the ball that turns that’s holding the gun. So I feel it’s a very LEGO way, using existing elements to find a solution for a problem.”

You’ll be able to judge the effectiveness of that solution for yourself on August 1, when 75309 Republic Gunship lands on LEGO.com and in LEGO Stores. Take a closer look at what to expect from the 3,292-piece set in our in-depth review.