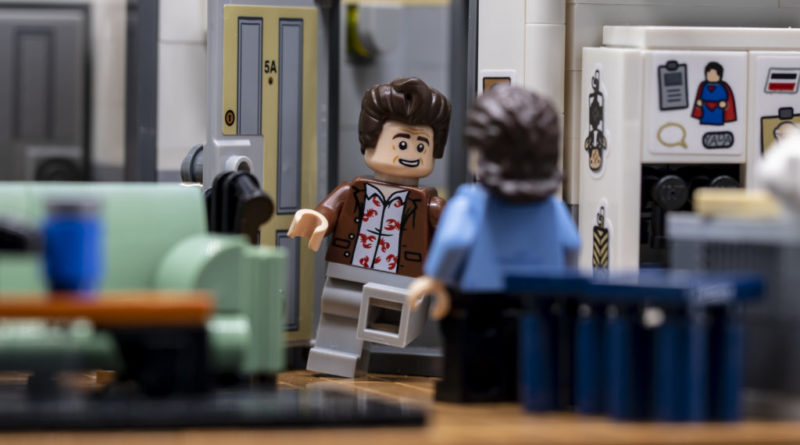 LEGO Ideas 21328 Seinfeld is packed with brilliant references to the sitcom’s entire nine-season run, from a particularly raunchy photo to a tasty snack that spawned a decade of catchphrases.

21328 Seinfeld is a love letter to the incredibly-popular and massively-successful ’90s sitcom, and as a result is crammed full of over 30 references to some of the most critically-acclaimed episodes. Nods to the show can be found everywhere: in the accessories the minifigures are carrying; the various furniture and paraphernalia dotted around the apartment; and in the excellently-designed stickers.

At every stage, a new Easter egg is just waiting to be discovered. If you’re a massive fan of the series then you’ll no doubt be able to find them all, but don’t worry if you can’t: we’ve put together a list of our 10 favourite references in 21328 Seinfeld.

Kramer’s famous catchphrase ‘Giddy Up!’ was first uttered by Seinfeld’s flamboyant neighbour in Season 2’s ‘The Baby Shower’. Meaning ‘it’s all good’ or ‘let’s go’, the popular catchphrase has been seen on GIFs, t-shirts, mugs and countless other Seinfeld memorabilia ever since. It makes an appearance in the set on the inside of the book Kramer is carrying.

In Season 6, we learn about one of Kramer’s stranger hobbies: creating miniature statues of his friends made entirely out of pasta. We only ever get to hear of the ravioli rendition of George Costanza, but are lucky enough to actually see Kramer’s pasta take on Seinfeld. Made out of fusilli pasta because Jerry is ‘silly’, the small pasta man sits proudly on Jerry’s shelf before being accidentally destroyed by George’s father.

Represented here using a sticker applied to a 1×2 tile, it would have perhaps been more suited to a yellow nanofig. Nonetheless it’s a wonderful nod to a fantastically funny episode.

Kramer isn’t the only one to get himself into all kinds of zany mishaps. George’s most famous misadventure happens in Season 8, when he sends racy pictures of himself to a photography store clerk, only to be accused of being in an illicit and illegal postal pornography ring. The now-iconic picture shows George spread out across a couch wearing nothing but his briefs.

The adult image has been LEGO-ised for a sticker in 21328 Seinfeld – presumably while clinging strongly to the set’s 18+ label – and appears as a picture hanging up on the kitchen wall.

In Season 3’s ‘The Alternative Side’, Kramer gets the chance to perform in the latest Woody Allen film, uttering the line: “These pretzels are making me thirsty.” He gets the whole gang to help him perfect his delivery, giving rise to one of the show’s most memorable quotes.

Jerry Seinfeld credits the phrase as the first of the show’s many catchphrases. During his stand-up tour of the same year, audience members would chant this during virtually every performance. Thankfully, there’s already a LEGO pretzel element, and it’s present and correct in 21328 Seinfeld.

In Seinfeld’s 67th episode, titled ‘The Glasses’, Kramer accidentally kills a dog when he knocks loose Jerry’s air conditioning unit. As a way to make up for it (the air conditioning, not the dog), Kramer goes out and buys Jerry a new AC unit.

The Commando 8 air conditioning unit boasts an impressive ‘12,000 BTUs of raw cooling power’ – but unfortunately is too big for Jerry’s apartment, and so Kramer simply leaves it wedged in the window frame of his study.

Monk’s Café is practically a second home for the gang, and is about as synonymous with Seinfeld as Central Perk is to Friends. With this set only featuring Jerry’s apartment, the designers needed to find another way to get the famous café in, which they managed through a sticker on the fridge.

Jerry famously loves Superman, and the Man of Steel makes an appearance in this set as one of the many stickers on the refrigerator. As his lifelong friend George notes, “Jerry’s whole life revolves around Superman and cereal.” As a result, Superman is one of the many recurring themes throughout the entire series’ run.

Apparently, there is a rumour that in each of the 180 episodes there is at least one reference to him, but Superman expert and late curator of the ‘Superman homepage’ Barry Freiman once looked into this claim and found only 46 mentions of the Man of Steel. Make that 47 if you include this reference.

Festivus entered popular culture when it was featured in the 1997 episode ‘The Strike’. George’s father Frank claimed to have invented the alternative festive holiday as a response to the over-commercialisation of Christmas. Celebrated on December 23, the festivities begin with the unveiling of a stark aluminium pole, left undecorated as Frank ‘finds tinsel distracting’.

Festivus is now genuinely celebrated around the world as a non-secular holiday, and the episode is so popular that the Festivus pole simply had to be included within 21328 Seinfeld.

One of the best Easter eggs in the set isn’t actually a nod to any one thing that happened in the series, but rather a homage to one of the men responsible for creating it. Alongside Jerry Seinfeld, Larry David helped turn the show into the global phenomenon it eventually became.

David of course stars in his own highly-successful sitcom ‘Curb Your Enthusiasm’, but it’s a really nice tribute to have him included within this set too. He can be found alongside the myriad references crammed on to that fridge!

Click here to read our full review of 21328 Seinfeld. The latest LEGO Ideas set is available exclusively for VIPs right now, before going on sale to everyone else on August 1.