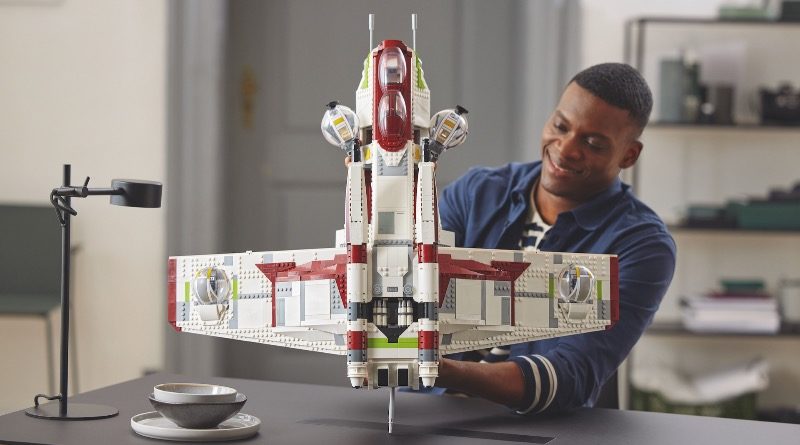 The LEGO Star Wars design team has revealed how another prequel trilogy set helped to bring 75309 Republic Gunship to life.

Look closely at the 10 printed windscreen elements in the fan-voted set, and you may recognise two of them from another staple of the LEGO Star Wars line-up: the Jedi Interceptor, which has used the same canopy element (albeit with different prints) since 2005’s 7256 Jedi Starfighter and Vulture Droid.

That same piece has now been adapted (again with brand new prints) for the double-cockpit that runs back from the nose of 75309 Republic Gunship. Speaking to Brick Fanatics and other LEGO Fan Media, LEGO Star Wars Creative Lead Jens Kronvold Frederiksen explained how the prequel trilogy windshield was fundamental to designing the latest Ultimate Collector Series set.

“I realised pretty early that we could actually use what I call the ‘Jedi Starfighter windscreen’ for the cockpit area,” Jens says. “Two of them, of course – one would be too small. And they were really close in the right size and scale, so all it took was some nice decoration, and we were there already. So it was quite easy.”

Both of the repurposed Jedi Starfighter (or Interceptor – the LEGO Group’s set names have used them interchangeably over the past 16 years) windscreens in 75309 Republic Gunship bear unique printing, and along with the eight bubble turret halves help the UCS model to set a new record for the LEGO Star Wars team.

75309 Republic Gunship will launch on August 1. For more, check out our early review, and learn why the designers used another familiar prequel trilogy piece for the ship’s cannons.