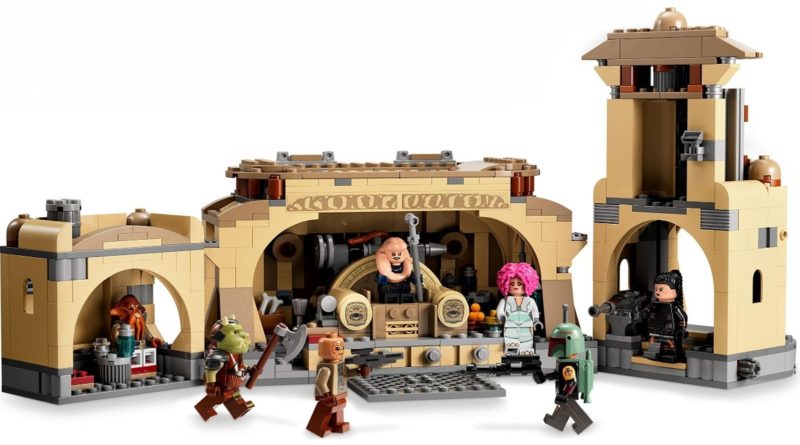 The Mandalorian is getting another LEGO model later this year as following blurry pictures of 75326 Boba Fett’s Throne Room showing up on Amazon, Brickset has shared much clearer images of the build and minifigure selection, showcasing the features and finer details.

As reported previously, seven minifigures are included in the set including a mix of brand new, old and updated character interpretations. Bib Fortuna, a Gamorrean guard, a Quarren, a Theelin dancer, and a Weequay guard are all featured as well as Boba Fett and Fennec Shand. That last character has a hair piece rather than her helmet, which you can find in 75315 Imperial Light Cruiser.

The better images also reveal possible expansion pads on the build, but you can read more about them by clicking here. As for play features, the LEGO Star Wars set is based on the post-credits scene of The Mandalorian and includes functions to fling minifigures from their positions as if they had been hit by blaster fire, as well as opening doors and folding sections to better pose the characters.

The throne can also be detached from the build similar to sections in 10291 Queer Eye – The Fab 5 Loft and 10292 The Friends Apartments. 75326 Boba Fett’s Throne Room was listed as releasing today, February 15, though that might only be an indication of when pre-orders will begin.

The Mandalorian is also getting another model later this year with the launch of 75325 The Mandalorian’s N-1 Starfighter based on the ship as it first appeared in The Book of Boba Fett.