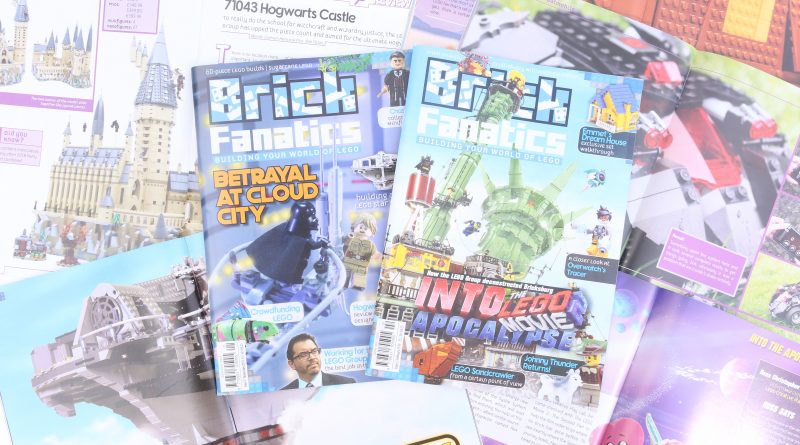 Brick Fanatics Magazine’s first two issues are now available to purchase in a single bundle, for a combined price of £7 / $11 / €12 plus postage and packaging

Issue 1 and Issue 2 of the print publication all about LEGO are now available for purchase in one combined bundle at brickfanatics.com/magazine, offering readers not only a great introduction to Brick Fanatics Magazine, but also a nice saving!

The very first issue of Brick Fanatics Magazine leads with a large-scale project to add some much-needed height to the LEGO Star Wars set 75222 Betrayal at Cloud City, before meeting the father and son team behind the charity initiative bringing LEGO to children in Uganda.

This debut edition of the magazine also includes a look at 71043 Hogwarts Castle – thanks in part to an interview with its designer Justin Ramsden – as well as a trip down memory lane with special looks at LEGO Town’s 6339 Shuttle Launch Pad and 4483 AT-AT. There’s also a hands-on experiment to track the true cost of collecting Collectible Minifigures, some nifty 60-piece LEGO builds, and some fascinating debut columns from our LEGO insiders.

Meanwhile, Issue 2 heads straight into The LEGO Movie 2 with a special walkthrough from the movie’s creative team on how they created the Mad Max-style wastelands of Apocalyseburg. With exclusive imagery and concept art from the film’s development, we are truly treated to behind-the-scenes insight on the 2019 film. There’s also the inside story of Unikitty’s creation as a character and her evolution into Ultrakatty, courtesy of LEGO Vice President of Design, Matthew Ashton.

Merlin Entertainment’s expansion of LEGOLAND into South Korea, a statistical look at the vibrant introduction of new LEGO colour Coral, and another great micro LEGO build offer a mix of insight and interactivity to the early pages of Issue 2.

Further inside is a consideration for the hidden appeal that LEGO Star Wars’ smaller Sandcrawler set offers the right LEGO fan, a rough and rugged field test for the surprisingly waterproof App-controlled Batmobile, and a look back at LEGO Wild West’s iconic 6769 Fort Legorado.

Issue 1 and 2 are each packed with high quality content designed to provide fans of LEGO with an immersive experience, as well as ideas and inspiration to get building too.

That’s a bargain – make the most of that saving, support the work that we do at Brick Fanatics Magazine and go pick up the Issue 1 and 2 bundle today.