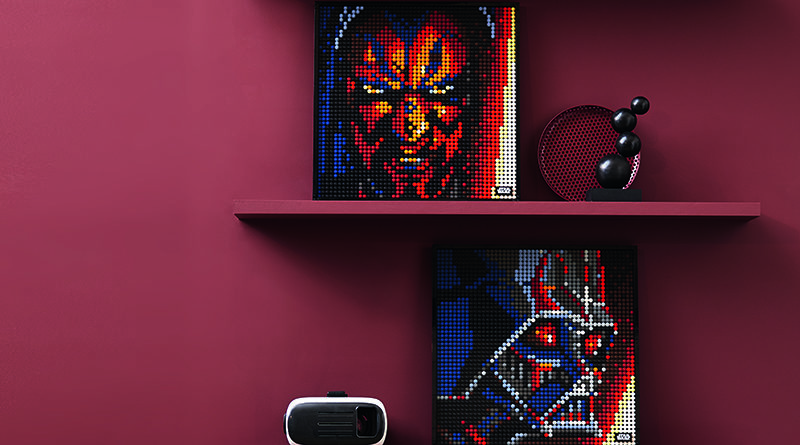 Brick Fanatics asks the LEGO Art team about how the first products were selected and the perennial question – to stud or not to stud?

There’s a whole new type of LEGO product arriving for adults with LEGO Art. The new theme will have ‘mature’ fans tiling or studding baseplates to create striking images, with four sets launching on August 1. 31197 Andy Warhol’s Marilyn Monroe, 31198 The Beatles, 31199 Marvel Studios Iron Man and 31200 Star Wars The Sith make up the first four sets in this new theme.

How did you choose the four launch products?

Monica: To be very honest when we were sitting in the situation, we had to choose the right directions to go. We have a relationship, or have had, with The Beatles, the agent, in connection with LEGO Ideas Yellow Submarine. We saw the success of that, were just going into the details about the concept, about building multiple versions in one SKU… it wasn’t so hard looking at which bands are epic and big – and always big – and made a mark in history, so I think Beatles was not so difficult to pick.

And for the Andy Warhol, we wanted to do something pop culture and who is more pop culture than Andy Warhol? It wasn’t a very tough decision but I am not going to lie, we had a big, big line up of different opportunities so there is plenty of things to pick from moving forward.

How did you choose the Star Wars characters to represent in that set?

Sam: I think that really came to deciding what the theme was of the set. You could do Star Wars and you could have ‘500 in 1’ and you’d still be missing a character that someone really loves, Baby Yoda or something like that. We really wanted to narrow it down for a theme that would be concise and actually be able to tell a story, also with an audio soundtrack.

We concentrated on The Sith as a focus point for this, hopefully not the last of the Star Wars LEGO Art SKUs in the future. Maybe we will have another one that could be The Jedi, there’s hundreds of options for us to do right now, but we wanted to concentrate on one area for it and we chose three of the coolest characters you could get out of Star Wars.

I think a lot of it came down to [that] we didn’t just want to keep doing faces over and over again as well, because it’s not a portrait product line, essentially we didn’t want it to just be faces and faces.

How did you decide which sets to use tiles and which to use studs for?

Kitt: One of the reasons why some of them have tiles is actually the plates, when you look at them, they look much more smooth, they were really looking nice. But also I think the one with the studs on cater also for LEGO fans, being a Star Wars fan and LEGO fan is really combined nicely in that one, whereas this one is perhaps more appealing to not super fans.