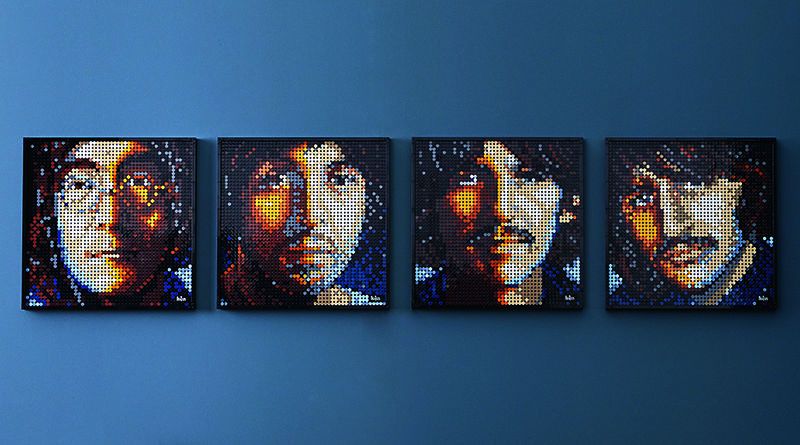 The team behind LEGO Art reveal the theme’s exclusive new elements, expanded colour palette and role as an entry point for new fans

LEGO Art is the new mosaic theme for adults. It offers the opportunity for grown-ups to relax whilst applying LEGO tiles and plates in a certain pattern to produce something worthy of hanging on the wall. Launching with 31197 Andy Warhol’s Marilyn Monroe, 31198 The Beatles, 31199 Marvel Studios Iron Man and 31200 Star Wars The Sith, it is intended to become a new ongoing theme.

Within each LEGO Art box there is a new brick separator and the new 16×16 elements that combine to make the larger picture. “For now these elements are exclusive to LEGO Art,” Sam confirms.

“Right now there are plans to launch them across all of LEGO but because we have so many in each set, we don’t have enough machines to make enough right now. So that’s why they are exclusive to us.”

It’s for new fans too

“We are expecting this kind of product to attract a lot of non-LEGO fans, new consumers to the portfolio who maybe haven’t found that a LEGO model was something they wanted to have on display in the home,” Sam reveals. “Maybe this kind of offering is something for them. That’s why we have tried to go a little bit outside of the box, away from some of the usual LEGO themes, especially with the first two products.”

Each LEGO Art set will include additional bricks, which are necessary in order to allow for the alternate models. Rather than limit themselves, the design team decided to include these extra pieces.

“Some of them are up to four to seven percent extra so you get a lot of extra bricks,” says Kitt, when asked about if including alternate builds led to compromises. “Where you can reuse, as you can see for example in The Beatles, the skin colour was easy to mingle around and do on all of them, then for example Marilyn Monroe where you have different backgrounds, you needed a spare colour. In that one I had to use more extra bricks than in The Beatles. I wouldn’t say that we have been compromising, we decided to make it as good as possible.”

There were not just new bricks created for the theme, but new colours introduced for plates and tiles. 31197 Andy Warhol’s Marilyn Monroe and 31198 The Beatles use studs, while 31199 Marvel Studios Iron Man and 31200 Star Wars The Sith use tiles.

“In tiles, we had nine new colours created for it. The one with the studs, there’s around seven and most of them were actually made for the Star Wars,” Kitt explains.

As well as including multiple designs in each box, three copies of 31199 Marvel Studios Iron Man and 31200 Star Wars The Sith can build larger pictures.

“[What’s] really exciting about this SKU is if you buy three of the set and you decide I really don’t want to have these three on display anymore, you can actually take them apart and build one huge combined image and hang it on the wall, so this takes three boxes to build but we do include instructions online,” says Sam.

Fans will note that rather than the square plates and tiles usually used for fan made mosaics, the team opted for circular elements.

“The reason why we chose the round ones is when you use the square ones you use a lot of force to line them up so you make them look straight in the lines, but what we found out when we started using the round ones was actually that you could see through to the plates in the background,” Kitt elaborates. “[It] was actually adding a lot of the look of it, making the colours meld more gently into each other –  the lines weren’t so sharp anymore, which suited this really well. So it was like it’s a practical thing but [also] for the look of it, it worked so much better.”

Each set has a complementary soundtrack that can be accessed via a code in the instructions. It is intended to make the build more of an experience, allowing the consumer to get lost in the creative process.

“It’s not music soundtracks, it’s more like a dialogue,” Monica elaborates. “It is interview based so there is music that’s spliced up. [For example in] The Beatles one, the people talking are talking about specific Beatles songs and what they mean to them and what they meant to the Beatles around the White Album era so [there are] snippets from songs going in there. But it’s not a music soundtrack, it’s more a dialogue based thing.

“They are between one hour up until about two hours, depending on the story the participants and what we want to tell, it differs from SKU to SKU, but that is about the length you should expect.”

In the case of 31200 Star Wars The Sith, the artwork has never been seen before. “The artwork has actually been developed by Lucasfilm exclusively from this product line, so this is artwork you can’t find anywhere else,” says Sam.