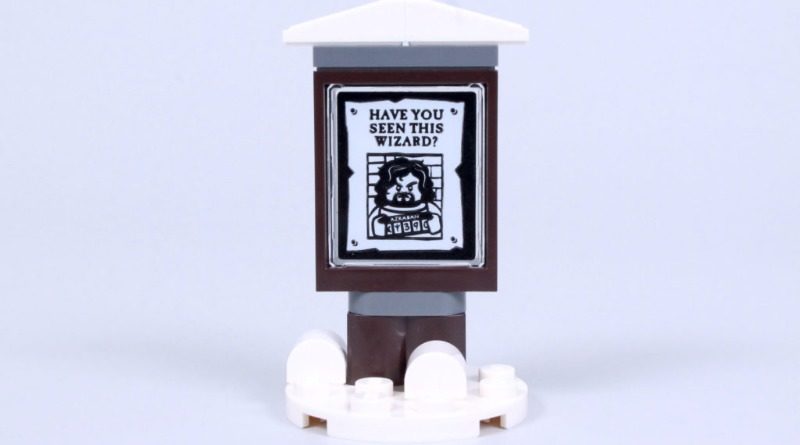 The build is made up of two main parts: the buildings of Honeydukes and the Three Broomsticks, two of the favourite locales visited by Hogwarts students in Hogsmeade. However, the minifigures and extra elements give the set a slightly confusing timestamp.

The sign with wanted posters for Sirius Black mean that this particular scene must be taking place during Harry Potter and the Prisoner of Azkaban, when Sirius is still on the ran and thought to be a Death Eater. However, we only discover Ambrosius Flume and Mrs Flume’s names in Harry Potter and the Half-Blood Prince, in both the book and the film.

We see Mr Flume briefly in the third film, but only hear of him directly in the sixth book. His character is also expanded on in various Harry Potter games. Including him and his wife with their names here is a fun inclusion to pad out the world of Hogsmeade (and we can assume that they did have names, even in the third movie), but it shows that the LEGO designers are happy to pick information from throughout the series to make their sets more well-rounded.

If you want to see the brightly-coloured minifigures for the Flumes up close and personal, you can get your hands on 76388 Hogsmeade Village Visit at a discount price with our exclusive discount, running until 23.59 tonight.

All you need to do is enter code BF153 at checkout to make the most of the 15% discount, down from the already-reduced RRP, allowing you to pay just over 20% off the original cost of the 851-piece set. On top of that, if you sign up to Jadlam’s loyalty program, you’ll also earn £5 back in vouchers for every £100 spent, plus bonus points on your birthday, for following Jadlam’s social pages, and even just for signing up at all.

Purchasing your copy of 76388 Hogsmeade Village Visit from Jadlam using our exclusive code will help to support the work that Brick Fanatics does, including bringing you future discounts and offers. Thank you!