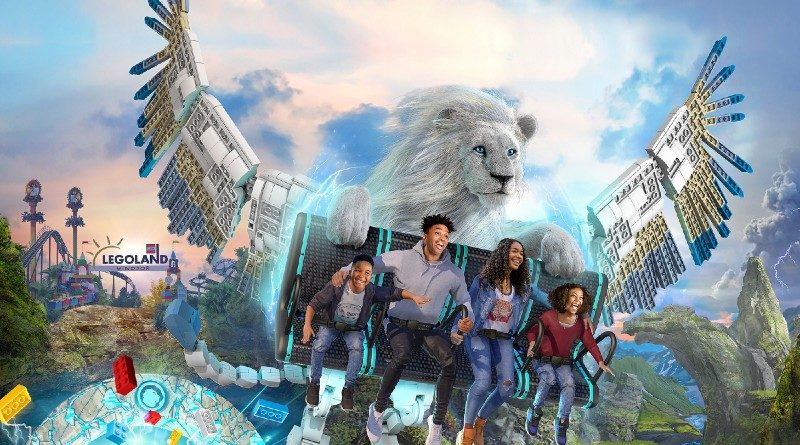 LEGOLAND Windsor will soon be opening its new MYTHICA expansion, the biggest investment into the park since it opened, so here’s everything you can expect to find from models to rides.

MYTHICA is set to transport guests to a world of beasts big and small on May 29, and with this being the largest expansion for the resort yet there are quite a few new additions for you to look forward to.

Thankfully, we’ve compiled a list of everything coming to MYTHICA and even how it will affect the rest of the LEGOLAND Windsor Resort:

MYTHICA will feature two new attractions for the LEGOLAND Windsor resort, each with its own models or other theming elements. It will also be reusing an older water attraction with a mythical twist. Flight of the Sky Lion is the grandest of the new rides and will be the UK’s first Flying Theatre. Guests will be invited to soar across Mythica on a tour given by Maximus the Sky Lion, whose massive model will stand outside to welcome you in.

Fire and Ice Freefall consists of two drop towers, each representing one of the two elements. The drop towers will lift you 13 feet in the air, as high as 325 minifigures, before plunging you back to MYTHICA. Hydra’s Challenge is a rethemed attraction which by looking at the new artwork, seems to feature a huge build of some sea serpents. It will spin guests around on top of the water and is said to have an interactive element to it.

The LEGOLAND Resorts aren’t just known for their thrilling rides, but also their detailed LEGO builds, and while MYTHICA won’t include its own Miniland, it isn’t skipping out on some sizeable creations. Perhaps the most recognisable of these will be the aforementioned Sky Lion build, made up of over 600,000 pieces and sat in front of the land’s main attraction.

However, there will be plenty more models dotted throughout the area, including the menacing Chimera. The social media team for the resort have been slowly unveiling some of the models leading up to the grand reveal, with a good amount of the creations being entirely new and not based on any mythology, such as the Flowery Rhino.

The new expansion will also some feature plenty of family-friendly experiences, with younger guests playing a huge part in the resort as a whole and especially in the new land, there was even a competition for children to design the final creature model coming to MYTHICA. As such, those who might not be as interested in thrills can look forward to a few other experiences.

LEGOLAND Windsor’s app will soon see a new feature added to it as any of the beasts in the land will be able to be scanned and brought to life on the screen using augmented reality. A creature encounter will allow smaller visitors to meet some of the mythical beings including a winged Unicorn called Bitsandbobs. And of course, it wouldn’t be LEGOLAND without some building, so guests will be able to create their own creatures and add them to the Creature Creation zone.

To help promote the expansion, LEGOLAND Windsor’s 4D cinema will be playing a new movie telling the stories of the parallel, mythical universe. The film is listed as exclusive in the press release which might indicate that neither the movie nor possibly the expansion will be coming to any other LEGOLAND Resorts. This might be because the land was originally drafted as The LEGO Movie World after plans were already in place.

LEGOLAND Windsor is currently set to reopen on April 12 and the new expansion is planned to be welcoming guests from May 29. However, these dates are subject to change following government guidelines in light of the ongoing pandemic. We’ll keep updated if these dates change but hopefully, you’ll soon be able to explore the world of MYTHICA.