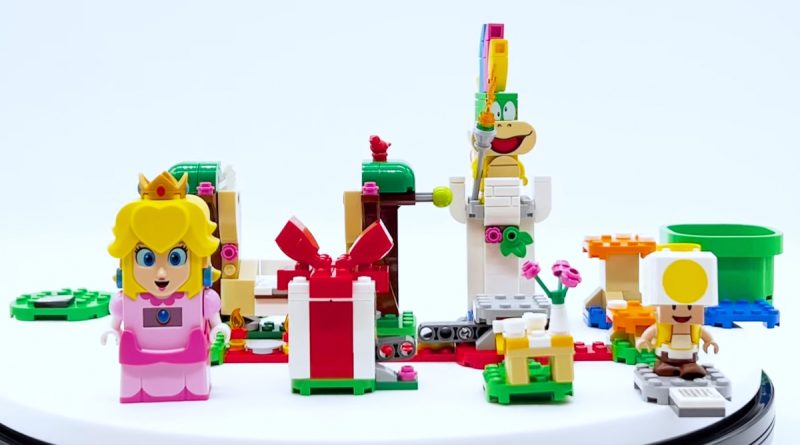 The months-long wait for the next LEGO Super Mario Starter Course is almost over, and early reviews of 71403 Adventures with Peach have now given us a first look at the next digital figure.

Joining Mario and Luigi as playable characters in the LEGO Group’s interactive theme, Princess Peach arrives as part of her very own Starter Course on August 1. That’s almost five months after she was initially unveiled alongside the rest of the Super Mario summer 2022 wave, which also includes six Expansion Sets and a new series of Character Packs.

Like the two Starter Courses before it, 71403 Adventures with Peach includes more than just a single digital figure in the box. In this case, we’re looking at the usual Start Pipe, Goal Pole and assortment of environments and platforms, along with a swing, Lava Bubble challenge, Flying Question Mark Block and Lemmy and Toad figures.

But while those all offer ways to expand your LEGO Super Mario course, Peach is obviously the real star of the show. And thanks to an early review of 71403 Adventures with Peach from YouTuber Bricks By Mind, we’ve now got a first glimpse at the Princess in action.

While she largely interacts with the pre-stickered barcode pieces in the same way as Mario and Luigi – only with distinctive sound effects – there are a couple of physical differences that set Peach apart from her contemporaries. Her ears are pre-moulded to her head, for example (where the Mario Bros use removable 1×1 tiles), and instead she sports huge earrings. She also swaps out the cap for a crown, befitting her title.

In step with the previous two characters, the lower half of Peach’s dress can be removed and replaced with any of the Power-Up Pack outfits. (That dress piece is also compatible with Mario and Luigi, if you’re interested.)

Maybe the most interesting new mechanic that 71403 Adventures with Peach brings to the table, however, is its gift box. By interacting with the buildable box, each playable character can leave behind a gift for another – in Bricks By Mind’s example, Peach collects a fruit, then instead of consuming it, places it inside the gift box. Luigi then interacts with the box and collects the fruit for himself, awarding both players coins.

It’s a solid demonstration of how the LEGO Group is persevering with the multiplayer gameplay it first introduced with Luigi last summer, and which looks set to continue across the LEGO Super Mario summer 2022 wave – starting with 71403 Adventures with Peach.

“In terms of the build, this is my favourite starter set,” Bricks By Mind says. “In terms of playable characters, Luigi will always be my favourite, but I’m really glad we do have a third character – and for people who are huge fans of Peach this is really nice to get.”

The full wave of LEGO Super Mario sets – including 71403 Adventures with Peach – launches August 1 at LEGO.com and in LEGO Stores.