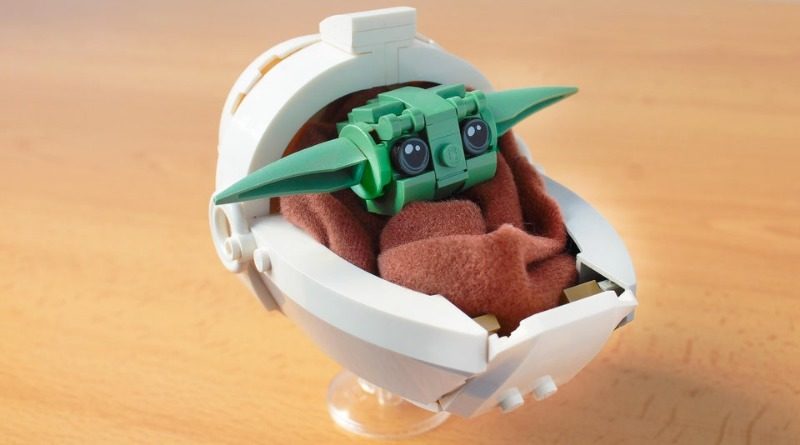 While we wait for the launch of LEGO Star Wars 75318 The Child, we’ve rounded up five fantastic fan-designed LEGO Baby Yoda builds.

The LEGO Group’s fifth set based on The Mandalorian will arrive on October 30. But that still feels like ages away, so we’ve been scratching our Star Wars itch by scouring the galaxy (well, the internet) for the best Baby Yoda builds around.

If you want a more tangible Baby Yoda fix, 75292 The Mandalorian Bounty Hunter Transport and 75317 The Mandalorian and The Child are both available now. The LEGO Group also recently revealed its own life-sized rendition of the galaxy’s cutest co-pilot, which is definitely worth a look alongside this list.

For now, here are the best fan-designed versions of Baby Yoda we’ve spotted online. We have spoken. (But do let us know if we’ve missed any!)

Wilson Du‘s design has proven incredibly popular among the fan community. And with good reason: it not only looks the part, but it’s also incredibly simple to build yourself. That’s because it only uses the pieces included in 75255 Yoda, except for its piercing black eyes. If you want to de-age your official set by 850 years, this is the way.

Reddit user Kimnotyze‘s take on Baby Yoda looks similar to Wilson’s, but there are some subtle differences. The head is a little flatter, the ears are a little more colourful, and he’s even holding the Razor Crest’s control knob. The mini space frog is just the icing on the cake (especially if the charismatic toddler can chow down on it).

Builder extraordinaire hachiroku24‘s Baby Yoda may be small, but it does an incredible job of conveying the adorable character’s charm and personality in relatively few bricks. Plus, bundling in the cloth cape from Star Wars constraction figure 75109 Obi-Wan Kenobi is nothing less than a stroke of genius.

Brick_Separator unfortunately hasn’t followed up with their full, final build. But their work-in-progress Baby Yoda is worth spotlighting anyway, because it might give you some inspiration for the mysterious creature’s eyes. Popping Technic gears behind transparent domes is an inspired solution, and one we’d love to see implemented in a full Baby Yoda build.

This might not be the most screen-accurate Baby Yoda around, but we love it for its charm. BrickJedi23‘s build looks absolutely adorable, particularly with his tiny arms down by his sides. And a lot of care has clearly gone into shaping his head, which makes great use of the growing library of sand green parts.

Our biggest takeaway from these brilliant builds is that designing Baby Yoda is a complicated profession. We’re keen to see how the LEGO Group has managed it – and we don’t actually have much longer to wait. 75318 The Child will launch on October 30. You can pre-order from LEGO.com right now, and support Brick Fanatics by doing so through our affiliate links.