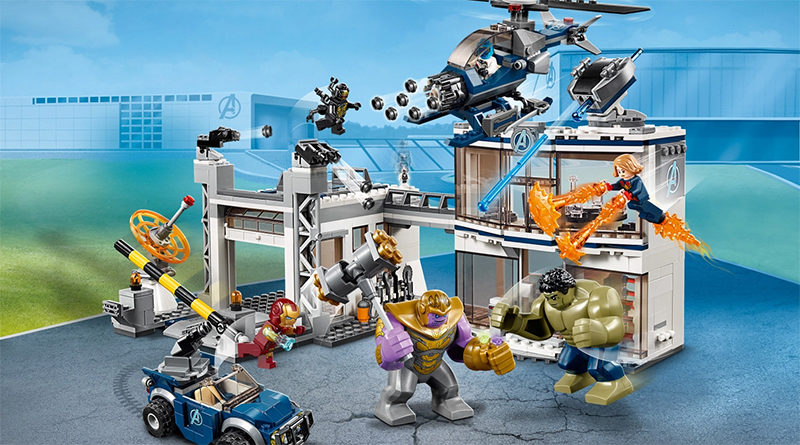 The relationship between the LEGO Group and Marvel has been going strong for 10 years, but after so long there’s still plenty that the theme has yet to cover.

LEGO Marvel has had some highs and lows when it comes to sets. We’ve had models for an older audience such as 76042 The SHIELD Helicarrier and more experimental outings such as LEGO Art 31199 Marvel Studios Iron Man.

However, there’s much that the theme has missed out on and many moments from blockbuster films missing in the sets. So, without further ado here are five LEGO Marvel missed opportunities.

Avengers: Endgame was one of the biggest cinematic events in history grossing over $2.7 billion worldwide. With such a huge moment in the MCU, surely the LEGO Group pulled out all the stops when it came to the film’s sets?

If you don’t remember the scene in Endgame where War Machine jumps into his modified Hulkbuster, or when the team pilots a Quinjet against Thanos’ army, that’s because they didn’t happen. The 2019 range of LEGO Marvel included six sets supposedly themed to the blockbuster movie but only one barely resembled the final scenes.

The rest felt out of place and included just some characters from the movie. So much else of the three-hour film would have made great sets, not least of all the final battle against Thanos. Hopefully, with Avengers: Endgame now streaming on Disney+, we might have a chance at seeing a few more models of the blockbuster event.

The Marvel Cinematic Universe features a wide array of characters, vehicles and locations for the LEGO Group to choose from, so it’s no surprise to see sets for almost every MCU project.

However, Marvel exists and continues outside of the popular franchise. In the early days of the theme, the LEGO Group knew this and produced sets based around the X-Men and more. Unfortunately, superheroes other than the Avengers or Spider-Man have become a rarity in the theme.

That may be due to there being too much to choose from with around 82 years of comics alone. A possible solution to this might be to theme one-off sets around a particular event like the Superior Spider-Man comic line. For example, a set including the main Parker Industries building with Black Cat performing a robbery could reference a very different version of the popular web-slinger. This is just one of many events that could inspire unique LEGO Marvel models and minifigures.

As we discussed in our review of 76175 Attack on the Spider Lair, the LEGO Marvel theme, outside of the MCU sets, is filled with repeating heroes and villains such as Venom and Green Goblin. It’s not like there’s a catalogue of over 900 villains to choose from, and even when considering villains for heroes that have already received minifigures there’s more than the usual Symbiotes that LEGO Spider-Man continues to fight.

Keeping it limited to Spider-Man characters, there’s still one team member missing from the Sinister Six with Electro’s iconic green and yellow suit. Even outside of that team, there are plenty of recognisable heroes and villains that the sets could include, if only in the one set.

This strategy has happened before with Kraven the Hunter making his only appearance in 76057 Spider-Man: Web Warriors Ultimate Bridge Battle. It would be good to see these characters make a return every once in a while, as a way to break up the monotonous battle between Spider-Man and Venom, Green Goblin and Doctor Octopus without having to produce new minifigures.

As of 2020, more unique and unusual Marvel models have started to appear, beginning with 76165 Iron Man and 31199 Marvel Studios Iron Man, both of which are targeted towards older fans of the blockbuster franchise.

While these two new outlets for the LEGO Marvel theme are appreciated, we can’t help but feel like more could be done, especially for the older audience. Recently the LEGO Group has grown a fondness for more complex 18+ sets, these are unique models that depict places, characters and more with plenty of pieces. Both 2020 sets mentioned fall under this category but unfortunately, only cover one character.

The 18+ range of sets could provide a good opportunity for the LEGO Group to finally realise some of the MCU’s grander scenes, without having to worry about piece count or play features. Just imagine a diorama of the Avengers: Endgame portals scene with exclusive minifigures from both factions, or maybe for the comic fans a modular X-Mansion. Expensive ideas but something that dedicated Marvel fans might be willing to buy.

Perhaps the biggest missed opportunity throughout the entirety of the LEGO Marvel theme has been the lack of arm and leg printing on minifigures. Yes, we’ve been treated to the occasional leg printing on Iron Man and Spider-Man but with such intricately designed characters, especially in the MCU, more can still be done.

Thankfully, leg printing is starting to become normal in LEGO Marvel sets, for example in the upcoming Eternals minifigures. However, arm designs are still mostly missing. One of the rare appearances of prints on minifigure arms is the 2020 Black Widow minifigure which features in sets such as 76166 Avengers Tower Battle.

Dual-moulded legs are another potential avenue for the LEGO Group to take and makes characters such as Spider-Man look far better than without them. While such decisions are more expensive for the LEGO Group, the growing prices of Marvel sets might need to be justifiable for older builders somehow, and more desirable minifigures is one way to do it.