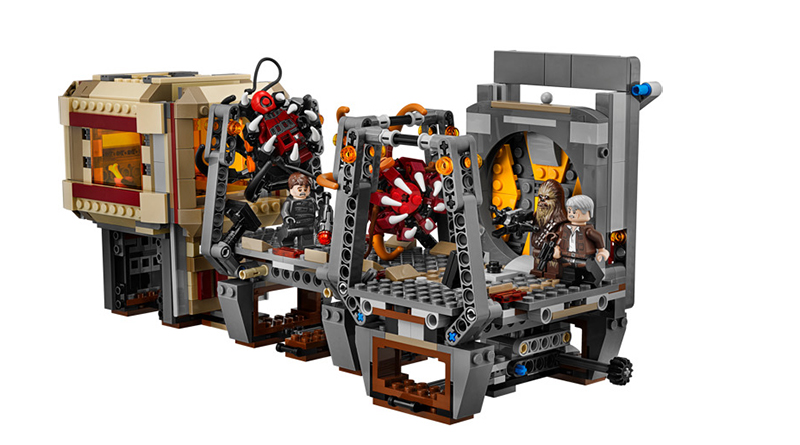 With Star Wars: The Rise of Skywalker wrapping up the sequel trilogy, Brick Fanatics selects five of the finest LEGO sets based on Episodes VII – IX

This will be a year long remembered for both LEGO and Star Wars fans, with Episode IX: The Rise of Skywalker concluding not only the sequel trilogy but the entire Star Wars saga, as 2019 also marks the 20th anniversary of LEGO Star Wars.

Since the release of Star Wars: The Force Awakens in 2015, the LEGO Group has had plenty of new material that has been transformed into a range of sets, from the typical locations and vehicles to statuettes of fan-favourite characters – with every one recreating some of that movie magic in the brick. Brick Fanatics is looking back over the last four years and selecting five of the best sequel trilogy sets that have been released.

X-wing fighters are an iconic symbol from the original trilogy, yet Poe Dameron’s T-70 managed to strike a balance between classic starfighter and sleek new ship. One of the best elements of 75102 are the engines that are cleverly designed to ‘split’ as the S-foils opened by twisting a knob hidden behind BB-8’s astromech slot. The set also adds a wonderful splash of colour into the predominately grey range with its unique black and orange colour-scheme, and it looks like this trend of bright hues will continue with 75273 Poe Dameron’s X-wing Fighter.

Locations are rarely recreated in the LEGO Star Wars theme, which is a shame as 75180 proves how well they can work. This is a fun set filled with play-features such as sliding doors and hidden compartments, just like in the film. Minifigures of the rival gangs actually fit into the mouths of the brick-built Rathtars, which used LEGO whips, tentacles and tooth pieces to perfection. This set can also easily be reconfigured with the option of recreating the numerous halls of the Erevana if fans buy multiple copies of the set.

Even though the TIE Silencer doesn’t get that much screen-time, 75179 wonderfully recreates the unique dagger-like wings of the ship. A key element to the success of this model are the strong Technic connections between the cockpit and the wings, so it can be swooshed around vigorously without anything falling apart. In fact one of the only minor issues with this set is that inside the cockpit there was not a single control panel to fly the ship, and although Kylo Ren is a powerful Force-user, even the son of Solo needs a joystick.

Who would have thought that the lovable, round droid BB-8 could be made from geometric LEGO bricks? 75187 takes some of the techniques used in 75159 Death Star but on a much smaller scale to recreate the curved shape of BB-8’s body, while LEGO radar dishes as eyes manage to capture the personality of the plucky droid. BB-8 not only looks good on the outside, but hidden inside is a brilliant Technic mechanism that allows him to do a signature thumbs-up when a side panel is rotated – which rivals a Porg for cuteness.

There have been five minifigure-scale versions of Han Solo’s beloved hunk of junk since 2000, but 75257 is the best at this scale. With the introduction of some new angled plates, the ugly gaps between the exterior panels are gone, both front mandibles have a more accurate length and even the positioning of the cockpit has been improved. At the moment it’s also the only way to get that new dashing Lando Calrissian minifigure, who after all these years is still rocking a cape. Just when fans thought they couldn’t possibly need another Millennium Falcon, 75257 came along…

This list may be the top picks from the Brick Fanatics team, but every LEGO Star Wars fan will have their own favourite sequel trilogy set for completely different reasons, whether that’s because of a particular scene, character, or something else entirely. The finale of the sequel trilogy certainly isn’t the end for corresponding LEGO sets (just take a look at the January wave) and Episode IX: The Rise of Skywalker is only going to add to the amount of inspiration the LEGO designers have already.