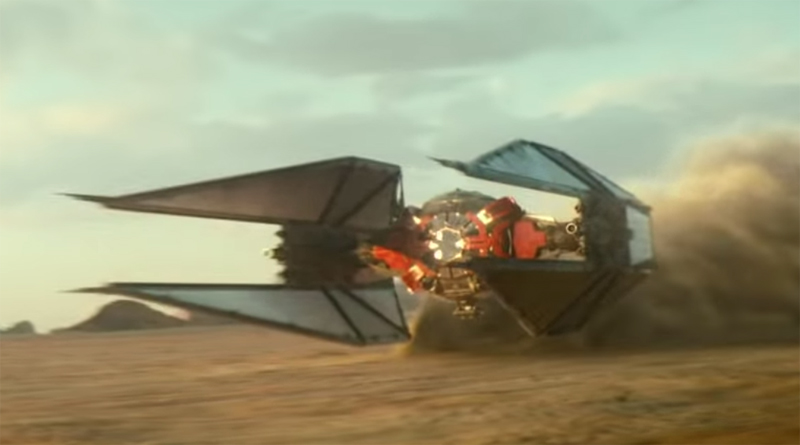 It is time for the Skywalker saga to end – and about time that fans of the Star Wars sequel trilogy get a LEGO Ultimate Collector Series set. Here are five new designs that would fit the format perfectly

It is time for Star Wars: The Rise of Skywalker to not only close the sequel trilogy, but the entire Star Wars saga. To coincide with the upcoming film, the LEGO Group has released a wave of sets offering fans some of the new vehicles.

Even with a plethora of new designs from across the sequel trilogy, the LEGO Group has only produced regular retail sets and not yet provided fans with detailed Ultimate Collector Series (UCS) models. Brick Fanatics is looking back at The Force Awakens and The Last Jedi, to select five designs that deserve the UCS destiny.

First seen during the opening of Star Wars: The Force Awakens, Kylo Ren’s Upsilon-class shuttle is the very definition of intimidating. At a bigger UCS scale hopefully the LEGO designers could finally perfect the angled folding mechanism for the wings – something neither 75104 or 75256 have satisfactorily managed. Another key element to the shuttle is its ominously red hued cockpit windscreen which could be easily recreated using trans-red LEGO bricks, so hopefully fans would be able to see minifigures inside, just like during the Battle of Crait. Obviously Kylo Ren would have to be included, along with General Hux and perhaps a Crait version of Luke Skywalker.

With its striking orange and black colour-scheme, Poe Dameron’s X-wing Starfighter is easy to spot in any dogfight. Although there have been a couple of UCS X-Wings, a T-70 has some major differences to the T-65 used by the Rebellion, so would look different on display. One of these differences is the way the engines ‘split’ as the S-foils open, along with the shape of the cockpit canopy which would probably need a new mould. Due to the sleek design of the ship, plenty of various tiles would need to be used, all in bright orange and black.

As the Resistance desperately try to flee D’Qar, fans get to see Kylo Ren showing off his amazing Solo family flying skills. The last UCS version of a similar ship was 7181 TIE Interceptor from 2000, so the TIE Silencer would benefit from all of the new parts and techniques that have been developed since then. Designing the dagger-like wings would be the hardest element, as they extend far beyond the cockpit, so would need to be extremely stable. Controls inside the cockpit would be an added bonus along with a lot of greebling on the outside.

These ships might not get much screen time, but they sure do pack a punch with the explosives, managing to take down a massive First Order Dreadnought. A Resistance Bomber would also be a very unique entry into the UCS line-up, making for an eye-catching display piece. One of the biggest challenges of upscaling 75188 Resistance Bomber would be the two rotating gunner-emplacements, which might need new transparent LEGO radar dishes. A UCS version would also be the perfect excuse to include a unique variant of Paige Tico with her beloved Otomok medallion, which was missing from her original minifigure.

Bigger is usually better and the First Order took that to heart with the AT-M6, which towers over a classic Imperial AT-AT. Angled plates would need to be used to recreate the sloping back of the walker, with Technic pins and beams imitating the mechanism of the front ‘feet’. Much like Kylo Ren’s shuttle, the windscreen of the AT-M6 would need trans-red pieces, and overall the shape of the head would need to incorporate the mandibles at the bottom. Perhaps with the new Powered Up system, a UCS AT-M6 could even be motorised.

When it comes to Star Wars UCS sets, the sequel trilogy offers plenty of inspiration, particularly the fleets of the First Order, that would make for display models and add some variety into a range that mainly focusses on the original trilogy. Maybe with the saga now coming to an end, the LEGO Group could delight fans by creating sequel trilogy UCS sets as a way to remember this finale that has been over 40 years in the making.