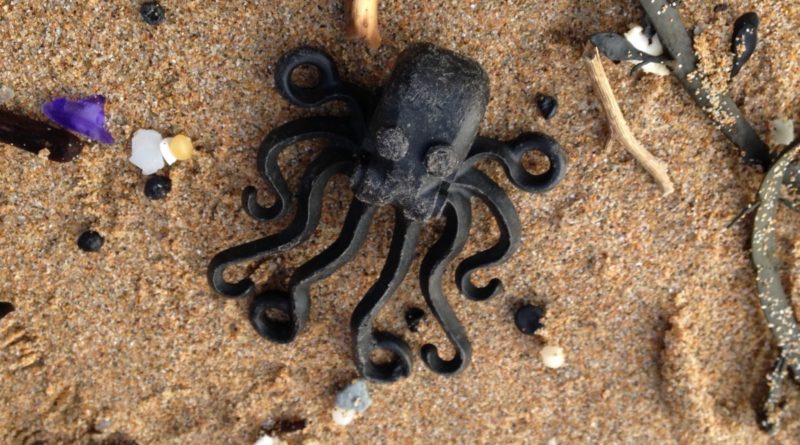 Twenty-five years ago today, almost five million LEGO bricks fell into the sea – and new pieces are still washing up on beaches a quarter of a century later.

On February 13, 1997, the Tokio Express was hit by what its captain has since described as a ‘once in a 100-year phenomenon’, a rogue wave that tilted the ship 60 degrees in one direction, then another 40 degrees back. The freak incident saw 62 containers lost to the ocean, some 20 miles off Land’s End in Cornwall, England – including one housing 4.8 million LEGO pieces.

It didn’t take long for some of those elements to begin washing up on Cornish shores, and by some strange coincidence, many of them were nautical: octopuses, cutlasses and dinghies, mixed with dragons, windscreens and door frames – a snapshot of the ‘90s parts catalogue.

With the help of the local fishing community, beachcomber Tracey Williams has spent the past decade retrieving and chronicling as many of those elements as possible. She’s now compiled all her journals and records into her new book, Adrift: The Curious Tale of the LEGO Lost at Sea, which arrived on shelves earlier this month. We caught up with Tracey to find out more.

Brick Fanatics: How did this journey of LEGO beachcombing start for you?

Tracey: As a family, we’ve always beachcombed, and about 40 years ago, my parents moved to a house on the clifftops in Devon. It was there in 1997 that we started finding the LEGO washed ashore, and obviously it was little sea-themed pieces: the life jackets and the slippers and the occasional dragon, octopus, bits of seagrass. We knew it was from a cargo spill. And at weekends, I’d take my children on a treasure hunt, and we’d fill buckets with the LEGO. It was just a bit of fun back then. And then we moved inland, and I forgot about the LEGO for a while.

Then in 2010, I moved to Cornwall, and on my first trip to the beach, I found some LEGO. And I just thought, ‘That’s amazing that that is still turning up all these years later.’ So I become part of a beach clean network, and I set up a Facebook page, because I thought it would be quite interesting to see who else found the LEGO and what pieces they had found and how far it had travelled over the years.

People got in touch in their hundreds to report their finds, and then the BBC saw it, and they did a feature on it. And then it sort of went global and all sorts of people got in touch. Everybody began to share memories of their LEGO finds. So we started to plot it and map it, and that’s how it all began.

It does seem a long time ago. My children were tiny then! So yes, it has been a long, long voyage. But I think it’s a voyage that’s going to continue for hundreds, if not thousands of years. We recently teamed up with Plymouth University to see how long LEGO would last in the ocean, and the scientists who carried out the experiments thought it could last anywhere between 100 and 1,300 years.

What we’re also finding now is that a lot of LEGO that was assumed to have sunk back in ‘97, and therefore was lost without trace, is now making its way ashore. I live over 50 miles from the site of the spill, and every time there’s a big deposit of kelp, we’re starting to find LEGO amongst it – and we’re starting to find the LEGO that sank. In the old days, we used to find all the floating LEGO, so the cutlasses and the flippers and the life jackets, but now we’re finding the bits of LEGO that sank.

Why do you think those pieces are only just turning up now?

I think they’re probably being swept along the ocean floor. The ocean surface currents will be sweeping the LEGO long distances – some of the dragons have been found in Holland, for example – but what we think is happening now is that the sea floor currents are also moving the LEGO, just a bit more slowly.

In the book, you quote oceanographer Dr. Curtis Ebbesmeyer, who suggests the shipping container is still on the ocean floor, its door slightly ajar, slowly discharging LEGO pieces.

That was his theory. What we don’t know, [and] what I’d love to find out, is if that container still exists. We don’t know whether the container is lying intact on the ocean floor and gradually releasing its contents, or whether it’s long since broken up.

A lot of fishermen think it’s probably so badly damaged now that it wouldn’t be recognisable, but it would be interesting to find out, because there’s still so much of the LEGO we’ve never seen. There were the 50,000 LEGO sharks. Where are they? Are they still lying trapped in a box on the seabed? Or are they trapped in the remains of a shipping container, and will we start to find those one day?

Have you ever looked into getting a diving team down to check?

I think it’s probably too deep to dive. But I know someone who searches for shipwrecks, and he thinks that if the containers are there, he could find them. And I think that would be really interesting to see if it is still there.

How much does Adrift focus on the environmental impact of the spill?

The book is really all about beachcombing for plastic. It’s about the changing nature of beachcombing – how we used to search for shells and sea grass, and now we pick up plastic. But whenever there’s a cargo spill, you never really hear about all the goods that sink to the sea floor. There’s a brief flurry of interest in what was in the containers that went overboard and what’s likely to float, and there are usually a few images of beaches covered in floating debris, and then you never really hear any more about it.

But what we know from the LEGO story is that 25 years on, the LEGO that originally floated ashore is still trapped in sand and sand dunes and between rocks. And the LEGO that sank is still at the bottom of the sea and still being found in fishermen’s nets, and some is gradually making its way ashore, swept along the sea floor. So it’s all still there. And much of it we’ve never seen – we’ve never seen the magic wands, or the dragon wings, or the sharks or the shields.

I think the LEGO story is a really good way of understanding plastic in the ocean in a way that’s not too intimidating or frightening. It’s something that everybody can identify with. And you can look at the before and after pictures of the dragons and the octopuses and see what the sea and sand has done to them and how they’ve been worn down. So I think it’s a very visual thing.

You posted an image to your Twitter feed of a green baseplate that you’d barely know had been in the ocean for 25 years.

People don’t believe that picture. ‘That hasn’t been at the bottom of the sea.’ But I know for a fact it has – I go down every week and meet the fishermen to see their catch of the day; what LEGO they’ve found. They find it all the time, and that’s how it comes out of to the sea. Some of it’s more pickled than others. But those green baseplates are pretty much intact, aren’t they? If it wasn’t for the marine life growing on them you probably wouldn’t know they had been at the bottom of the sea for 25 years.

Is that something you think would be unique to LEGO, compared to other plastic toys?

LEGO has a very shiny surface, and some objects seem to be more encrusted than others. That’s something that I would actually quite like to explore with the scientists we’ve been collaborating with, to see why some of it isn’t encrusted. That’s quite interesting, but not something we’ve studied in detail yet. Part of the problem is that a lot of this book was written during lockdown, so we couldn’t get into the lab to do the experiments that we originally planned to do.

Would you group LEGO in with other plastic toys you find on beaches?

I think [the LEGO Group] is a great company – the aim of this book wasn’t to single out LEGO as a source of plastic pollution. It was searching for the LEGO that really made me realise how much plastic there is in the sea and in the sand. The LEGO Group is doing all it can to make its bricks more sustainable, and the whole idea is that you pass it on generation to generation.

We do find LEGO all the time, and it isn’t just LEGO from the spill. A lot of LEGO does end up on beaches anyway; it does end up in the environment. When I spoke to Tim [Brooks, Vice President of Environmental Responsibility at the LEGO Group], that was one of the things they really wanted to investigate, how it was ending up in beaches, because in their view, LEGO should only be in homes or in schools, not out in the wild.

Do you think the LEGO Group is doing enough as a company to make itself more sustainable?

It’s a real dilemma. The LEGO incident was an accident – no company wants its goods to end up in the ocean. And what do you do if it does end up in the ocean? If you were to spill a container load of plastic on a motorway you could go and pick it up, but when it falls into the ocean, what can you do? It’s a very difficult situation that no company wants to find itself in. But [the LEGO Group] does produce a lot of plastic, and they are working hard, I know, to try to reduce that.

[Last] summer, I picked up over 400 buckets, spades and sand toys – single-use plastic that’s shipped halfway around the world. They come in those mesh bags, people use them once, they break, and they leave them behind. That’s a far worse situation; the volume of those toys that are left behind. The buckets are so flimsy that the minute you fill them with sand, the handle snaps off, the bucket falls down and smashes, and then it breaks up into microplastics. Things like that are a far worse problem.

Adrift: The Curious Tale of the LEGO Lost at Sea is available to order from Amazon and all good bookstores now.