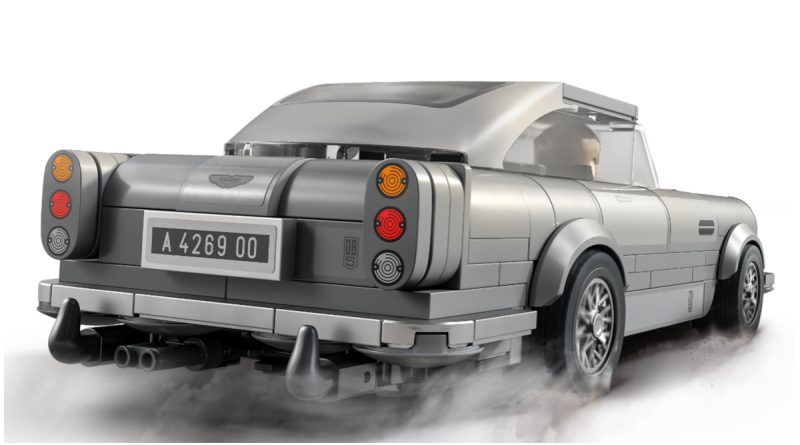 With the release of the Speed Champions Aston Martin DB5, we’ve been thinking that James Bond has a rich history of cars which would be ideal for a new LEGO subtheme.

In a recent interview, LEGO Speed Champions guru, Chris Stamp, said that he’d developed a ’10 year plan’ for the theme. Two of the recent additions to the range, 76912 Fast & Furious 1970 Dodge Charger R/T and 76911 007 Aston Martin DB5, are both movie-based sets, and were a key part of that plan. Indeed, rumours have been circulating for a while that Dom’s Charger will be joined at some point by Brian O’Connor’s Nissan Skyline GT-R 34. Still just a rumour at the moment though.

But if Stamp had a ten year plan, then while he might have just pencilled in ‘Years five though ten – let’s hope that there are some great movies released with cool cars in them’, that’s unlikely. More likely is that he’s got his eye on cars from movies past, and while we’ve got our speculation hat on, we’re going to add ‘Ten year plan’ to ‘Aston Martin DB5’ and get ‘James Bond subtheme’.

We might be wildly off of course, but it’s not an unreasonable assumption, so we plundered 007’s back catalogue of cars and came up with a list. Some of them obvious, some of them a bit left-field. Chris Stamp, if you’re reading – crack on! We’d like to see all of these, please!

Bond has had a few Aston Martins over the years, but with the DB5 already covered, we love the look of the DBS from On Her Majesty’s Secret Service. Driven by George Lazenby in his one and only outing as the suited and booted spy, the muscular looks and relatively flat panels should make for a pretty accurate replica in LEGO bricks.

About as far away from the typical Bond car as it’s possible to get (with the possible exception of the Tuk Tuk in Octopussy, and 40469 Tuk Tuk has that covered), the 2CV is a car beloved the world over. Bond fans would want it for their collection, but there are plenty of LEGO fans out there who would want a copy of the vintage French car which was in production for more than 40 years.

If you’re scratching your head thinking ‘What’s an AMC Hornet and when did Bond ever drive one’, let us say to you “Corkscrew bridge”. Remember now? In The Man With The Golden Gun, Bond, along with reluctant passenger, Sheriff J.W. Culpepper chase the assassin, Scaramanga, having to leap a damaged bridge in the process. Speed Champions have already tackled a number of American muscle cars, so this shouldn’t be too much of a stretch for the team.

For a period of time, BMW, rather than Aston Martin, was Q Division’s go to car supplier but some of them, like the 750iL were a little… dull. Even with the upgrades. But the Z8, a rare car at the best of times, had a little more style and pizazz. While it didn’t get much screen time, it’s a cool looking car, and would fit nicely into any 007 LEGO collection.

With the DB5 already accounted for, there was only ever going to be one car making the top slot. From The Spy Who Loved Me, the white Lotus that transformed into a submarine is one of the most memorable cars that Mr Bond has ever driven. At Speed Champions scale, it’s unlikely that we’d get any transformational capabilities, but maybe a few fins that could be clipped on and panels that could cover the wheels when removed are possible?

As lifelong Bond fans, we’re just dreaming here, but if there really is a ten year plan for Speed Champions, then a 007 collection, following on from the DB5 might not be such a crazy idea.

If you’d like to treat yourself to a LEGO set, then please consider using our affiliate links. Every purchase helps support Brick Fanatics. Thanks.