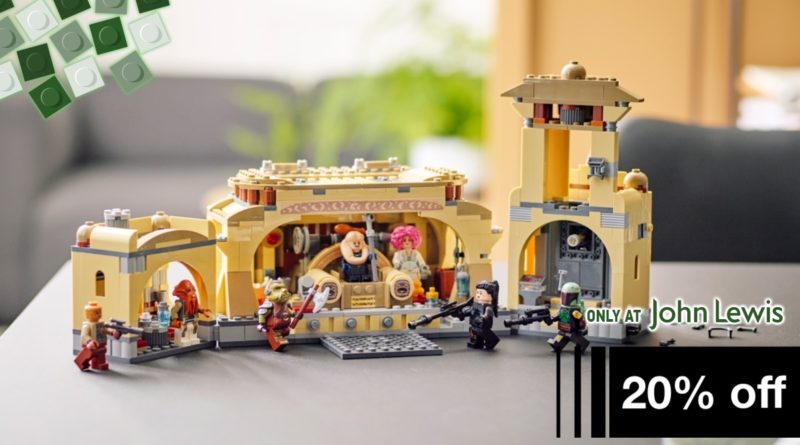 A number of LEGO Star Wars sets are included in the latest John Lewis LEGO deals, offering a great chance to pick up some new models in this theme with 20% off.

LEGO and Star Wars have long gone hand in hand, giving fans of the galaxy far, far away plenty to get excited about. Their current lineup of sets includes new scenes and old favourites, and with 20% off recent releases there’s plenty to explore.

Drawing inspiration from The Mandalorian, 75326 Boba Fett’s Throne Room recreates a new era of Jabba the Hutt’s palace. A new version of Boba Fett is naturally included, along with other familiar characters like Bib Fortuna and Fennec Shand. The throne room itself includes a hefty slice of Tatooine architecture, as well as the throne itself and a small dining area. You can pick it up now for £71.99.

75327 Luke Skywalker (Red Five) Helmet is another entry in the LEGO Star Wars Helmet Collection, offering the classic red and white design we’ve come to expect. It’s definitely one of the more visually enticing entries in the collection, which may explain why stock is explicitly low on the John Lewis site. It’s priced at £43.99 in this sale, although stock levels have been unable to fulfil demand.

If you’re a fan of the original trilogy, 75257 Millennium Falcon can also be found for just £111.99. Offering a particularly accurate build at this scale, it boasts great interior detail and an exclusive, elderly Lando Calrissian. It also reinstates the round rectenna dish from the early films, giving you some flexibility in how you interact with it.

75324 Dark Trooper Attack recreates one of The Mandalorian’s most thrilling surprises: a cameo by none other than Luke Skywalker. This set recreates a stretch of Imperial corridor and includes three new Dark Trooper minifigures. Naturally, a version of Luke Skywalker himself can be found here as well. At £19.99, now is a great time to make multiple purchases – stock allowing.

You can find several other LEGO Star Wars sets at John Lewis right now, although some of the more popular ones – including 75252 Imperial Star Destroyer – are currently out of stock. It’s worth checking back though before this sale ends. If you do choose to buy from John Lewis you can count upon excellent customer service, including free delivery on orders of £50 and over.