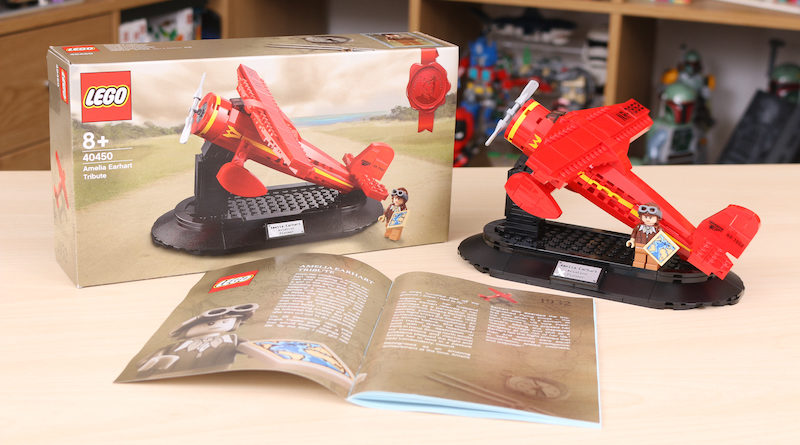 Amelia Earhart was the first female pilot to fly solo across the Atlantic Ocean, piloting her red Lockheed Vega 5B from Harbour Grace, Newfoundland to Culmore, near Derry, Northern Ireland. The flight lasted 14 hours and 56 minutes, saw Amelia contend with strong northerly winds, icy conditions and mechanical issues before landing (which meant the original destination of Paris, France was changed), then in response to a farm hand asking how far she’d flown, she famously replied ‘From America’.

40450 Amelia Earhart Tribute is a loving and very careful LEGO homage to the aviation pioneer and her red Lockheed Vega 5B, from the very specific shaping and contouring that the model captures to the markings along the side (albeit in yellow rather than gold) and the specific number that the plane had, NR-7952. The instruction booklet also includes a brief biography and recount of Earhart’s 1932 flight and together with the box art reflects the extra care and attention that has gone into realising this promotional item.

The LEGO set sits on a display stand with the accompanying minifigure designed to stand alongside it, rather than sit within. Whilst this means that it minimises an aspect of play for the younger builder, its primary intention as a display piece is wonderfully realised, creating a pose for the vehicle as if it’s just taking off.

In general, minifigures tend to warp vehicle dimensions when building interior space for them, so by not accounting for that with this plane, somewhat paradoxically, it allows it to be a truer minifigure-scale build. And whilst meant for display, the plane is completely removable from the stand and is surprisingly well-sculpted in detail, complexity and weight, at the same time as being a solid, sturdy model.

Where some gifts-with-purchase at LEGO.com and in LEGO stores can feel lightweight for the qualifying spend amounts, or in subject matter may only appeal to a select number of collectors or LEGO fans, 40450 Amelia Earhart Tribute is a well-realised promotional LEGO set, able to stand as its own model in credibility, collectability and wider audience interest, with historical and educational relevance. If there’s one gift-with-purchase to be ready to pick up when available, and hope that the LEGO Group carries decent stock levels of, it’s this one.